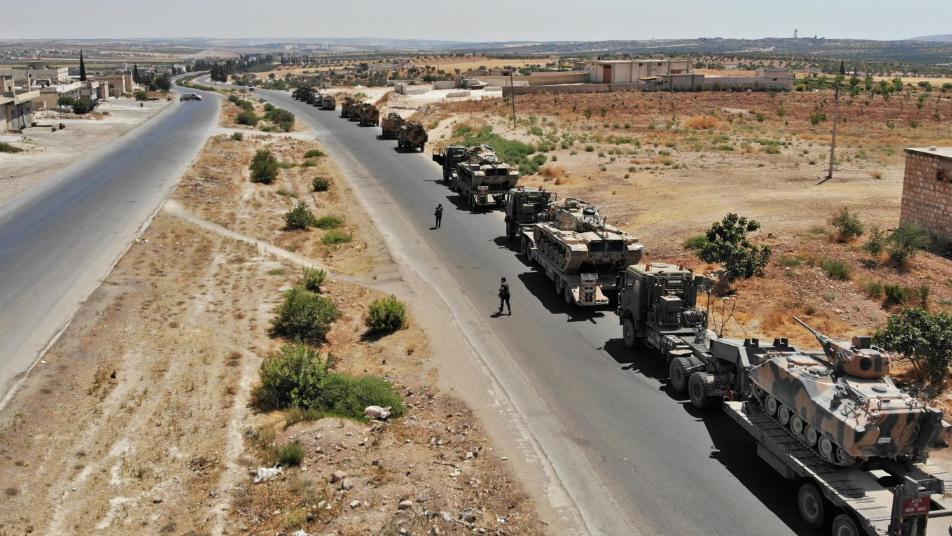 A convoy of Turkish military vehicles is pictured near the town of Maar Hitat in northern Syria's Idlib province on 19 August 2019 (AFP)
Orient Net
Turkish President Recep Tayyip Erdogan warned the Assad regime to withdraw behind Turkish observation post lines by the end of February or face repercussions.
Speaking at the ruling Justice and Development Party's (AK Party) parliamentary group meeting on Wednesday (February 5), Erdogan said Turkey will take action if the regime does not withdraw its militias in the designated areas.
"Turkey's air and land forces will move freely in all operation areas [in Syria] and in Idlib, and they will conduct operations if necessary," the president said, adding that the country will retaliate against all attacks on its soldiers or its allies' forces, regardless of the source.
"The agreements in Syria's Idlib and east of Euphrates not functioning," Erdogan said, as the regime continues to carry out attacks in violation of Sochi and Astana agreements. He continued by saying that Turkey aims to protect the lives and property of innocent civilians in its operations.
On Sunday, an attack by the Assad regime forces killed seven Turkish soldiers and a civilian contractor in northwestern Idlib province. Turkey retaliated in kind and destroyed regime targets involved in the attack.
"Nothing will be the same after Assad regime attack in Idlib, Syria killed Turkish soldiers," President Erdogan said.
He also noted that Turkey expects Russia to understand Ankara's sensitivities in the area.
With the aim of providing security to Turkish soldiers and observation points, the military is retaliating against any harassment or threat targeting observation points. Turkish soldiers are also actively supported by the Syrian National Army (SNA).