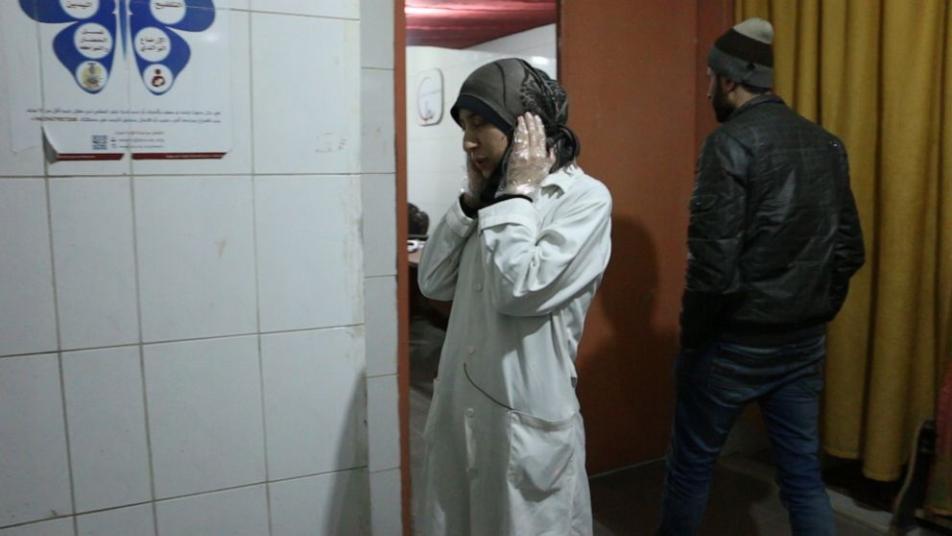 Dr Amani covers her ears during nearby bombings, in Al Ghouta, Syria.Dr Amani covers her ears during nearby bombings, in Al Ghouta, Syria. National Geographic
Orient Net
For Dr. Amani Ballour, arriving in the US is a not a dream come true, but a critical opportunity to be a "voice" for the millions of people still suffering in her home country of Syria.
The subject of one of this year's Oscar-nominated documentary films, Ballour was granted a US visa despite President Donald Trump's travel ban on visas for citizens of the war-torn country.
The female director of an underground hospital and now a refugee in Turkey, Ballour landed in New York Sunday to attend the Academy Awards next week and raise awareness of the unrelenting humanitarian crisis in Syria.
"I can be a voice for the Syrian people who are now voiceless, and I am proud to be able to do that," she said.
The Oscar-nominated film "The Cave" follows Ballour as she leads that underground hospital, known as the Cave, through siege conditions, constant supply and food shortages and near daily aerial bombardment by Bashar Assad and his ally Russia. Only 29 years old when her colleagues elected her the hospital's director in 2016, Ballour battles the endless stream of victims, but also the strong patriarchal society that pushes back on a woman leading the hospital.
Born in Ghouta outside Damascus, Ballour wanted to become a doctor despite her family's wishes. They told her that she could be a teacher, but "not a surgeon," she said, but she refused to give up.
"I know I can do something different," she told ABC News Chief Global Affairs anchor Martha Raddatz in an interview last year. "I have these ideas very early, I know I can."
She completed her general medical studies at the University of Damascus in 2012, one year after Syria's war started. Assad met what was at first a swell of mass protests against his rule in the midst of the Arab Spring with deadly force, turning the uprising into an armed conflict that soon drew outside powers and radical Islamist terrorists. The conflict has convulsed for nearly nine years now with at least 500,000 people killed and more than 6 million displaced.
That fighting began to hit Ghouta hard as Ballour was studying pediatrics. Amid a siege by the Assad regime and its allies, she abandoned her studies to start working as a doctor and treating people, especially children.
She joined the Cave in 2013 -- a hospital 65 feet below ground to shield it from airstrikes, as Assad began to target hospitals in the conflict.
She was there in the early morning hours on Aug. 21 when the hospital began receiving distressed patients with no outward signs of injury, but trouble breathing, disorientation, nausea, vomiting, and loss of consciousness.
The toxin used was sarin, a United Nations-designated weapon of mass destruction that attacks the nervous system. The attack, described by then-UN Secretary-General Ban Ki-moon as "the "most significant confirmed use of chemical weapons against civilians since" 1988, killed 1,429 people, including at least 426 children, according to the US government.
As "The Cave" documents, Ballour led the hospital through all kinds of attacks, including another chemical weapons attack in March 2018 and direct airstrikes "20 or more times," she told ABC News.
Right there with her was the film's director, Feras Fayyad. The Syrian filmmaker has been jailed and tortured by the Assad regime, but he continues to risk his life to tell stories of the conflict's victims and heroes, including his 2017 Oscar-nominated documentary, "The Last Men in Aleppo."
Fayyad and his team's footage from the trenches with Ballour became "The Cave," which was produced in conjunction with National Geographic Documentary Films. The Walt Disney Co. is the parent company of National Geographic and ABC News.
Eventually, the constant attacks by Assad and Russian warplanes forced Ballour to leave Ghouta. She moved to northern Syria in 2018 before crossing the border to Turkey, where she currently lives as a refugee.
"Now I hope by being a voice, I can help others get to a safe place too," Ballour said after arriving in New York Sunday.
With support from National Geographic, Ballour received a US visa after months of effort. For the first time since fleeing Syria, she was able to leave Turkey last month and travel from France, where she was the first non-European to be granted the Council of Europe's Raoul Wallenberg Prize for extraordinary humanitarian achievements.
She will travel to Los Angeles later this week to attend the Academy Awards ceremony with Fayyad and other members of the film's team.
While in the US, Ballour will tour the country to raise awareness of the ongoing violence in Syria and to raise funds for her Al Amal Fund, which advocates for and helps educate and equip female medical workers in conflict zones.
There are many who Ballour had to leave behind in Ghouta at the Cave. She said some of the staff who stayed behind had been arrested and one doctor was killed in prison. They are all still on her mind.
"I have a lot of memories -- most of them are bad memories. I dream a lot of these things sometimes. I woke up at midnight, crying, because I hear bombing or something like that," she said. "It's [a] very bad situation now in Syria."
By Conor Finnegan
Link to the original source of ABC News