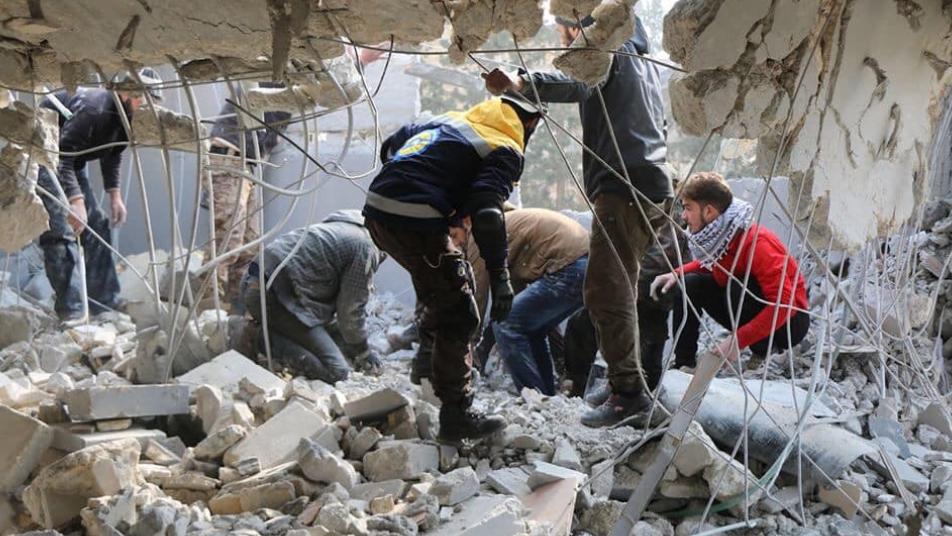 White Helmets Photo
Orient Net
Russian-Assad warplanes and Assad helicopters intensified bombardment on Aleppo countryside on Saturday (January 18), killing five civilians, including four members of a single family, Orient correspondent said.
Russian warplanes launched on Saturday several airstrikes on Reef al-Muhandiseen in Aleppo countryside, killing a man and injuring other civilians.
On the early hours of Saturday, the warplanes launched several airstrikes on a temporary housing of displaced persons near Darat Izza town, killing two parents and their son and daughter.
The Free Education Directorate suspended the educational activities in all the schools in Aleppo countryside for two days (Saturday and Sunday) to save the lives of students after the severe bombardment on Friday.
On Friday, Russian warplanes launched several airstrikes on a temporary housing of displaced persons in Awejel village in Aleppo countryside, killing a boy and a girl and injuring four others, including three women.
The warplanes also bombed several villages and towns in Aleppo countryside, causing substantial material damage and massive displacement of the population.
The Syrian Network for Human Rights SNHR documented in its report released on (January 1) 43 massacres committed by Assad regime's militias and 22 massacres committed by Russian forces in 2019.
The report documented the deaths of 3,364 civilians in 2019, including 842 children and 486 women at the hands of the perpetrator parties to the conflict in Syria, including 234 in December.