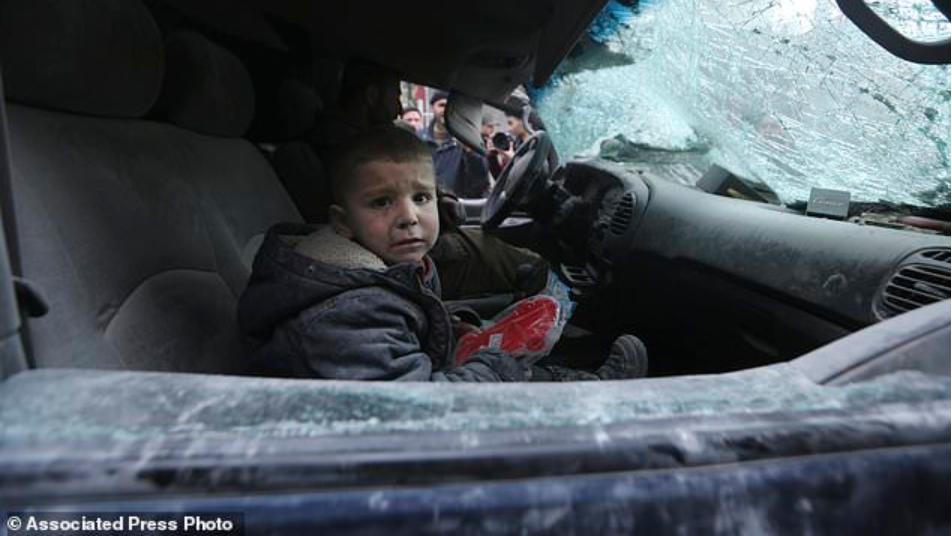 A boy cries after Assd airstrikes in the town of Ariha, in Idlib province, Syria, Wednesday, Jan. 15, 2020. (AP Photo/Ghaith Alsayed)
Orient Net
Around 350,000 Syrians, mostly women and children, have been displaced by a renewed Russian-backed offensive in the opposition-held Idlib province since early December, and have sought shelter in border areas near Turkey, the United Nations said on Thursday (January 16).
The UN Office for the Coordination of Humanitarian Affairs (OCHA) said in its latest situation report that the humanitarian situation continued to deteriorate as a result of the “escalating” hostilities.
Gruesome facts about Syrian children have been the focus of a new report by UN-backed investigators into the Syrian war, which for the first time looks solely on the plight of the children caught up in the conflict.
The group, known as the Commission of Inquiry for Syria, has been scrutinizing and chronicling human rights violations since shortly after the conflict broke out in 2011. The investigators said in their report released Thursday that the abuse and violence against Syrian children goes well beyond just getting caught in the crossfire of warring sides.
"After eight years of conflict, children in Syria have experienced unabated violations of their rights: they continue to be killed, maimed, injured and orphaned, bearing the brunt of violence perpetrated by warring parties," the report said.
The report did, however, say that 5 million children have been displaced internally and outside Syria, "robbed of their childhood" by violations from all sides.
Assad militiamen, which bears responsibility for respect of human rights on its territory under international law, ignored such commitments, the report said. It cited pro-regime fighters as "regularly targeting children using sniper fire" and deploying cluster munitions, thermobaric bombs and chemical weapons, "often against civilian objects such as schools and hospitals."
The report analyzed the period from September 2011 to October 2019 through more than 5,000 interviews with Syrian children, as well as witnesses, survivors, relatives, medical professionals, defectors and fighters.
As with its previous reports, the three-member Commission of Inquiry listed recommendations for the warring sides, Assad regime and the international community. But there are concerns the report will like many others in Syria's war, now in its ninth year, go unheeded and bring about few concrete results.
Russian jets and Assad artillery have pounded towns and villages in recent weeks in a renewed assault backed by pro-Iranian militias that aimed at clearing the opposition.
“This latest wave of displacement compounds an already dire humanitarian situation on the ground in Idlib,” David Swanson, Amman-based UN regional spokesman for Syria, told Reuters.
Russian and Assad jets resumed bombing of civilian areas in the opposition enclave two days after a ceasefire agreed between Turkey and Russia formally took effect on Sunday.
UN officials said earlier this month the humanitarian crisis had worsened with thousands of civilians on the run in Idlib province on top of close to 400,000 people who fled earlier bouts of fighting to the safety of camps near the Turkish border.
The latest offensive has brought the Russian-steered military campaign closer to heavily populated parts of Idlib province, where nearly 3 million people are trapped, according to the United Nations.
Based on Reuters, AP

Commission of Inquiry for Syria