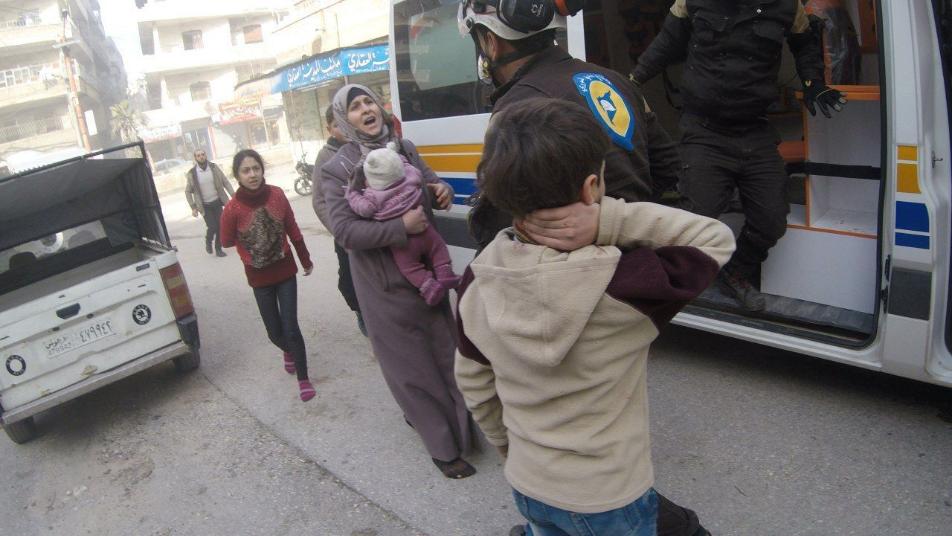 Orient Net
Assad warplanes and helicopters intensified bombardment on the demilitarized zone (DMZ) of Idlib countryside on Wednesday (January 15), killing and injuring civilians, violating a ceasefire announced by Russia and Turkish Defense Ministry on the 9th and 12th of January, Orient correspondent said.
The warplanes and helicopters launched several airstrikes on civilian homes, vegetables market and a street in Idlib city center, killing at least ten civilians and injuring 25 others.

Meanwhile, the warplanes bombed a popular market in Ariha town, injuring at least eight civilians.
White Helmets volunteers are working hard to rescue civilians from under the rubble of destroyed buildings in the aftermath of the airstrikes.
Russian Defense Ministry on Thursday announced a ceasefire, taking effect in the region at 02.00 p.m. local time (1200GMT).
On Friday, the Turkish Defense Ministry announced that Turkey and Russia had agreed on a cease-fire in Idlib set to start at midnight on Jan. 12.
On Monday, Assad regime's militias shelled Maarat al-Nuaman city in the demilitarized zone (DMZ) of Idlib countryside, killing a civilian and injuring three others.
On Saturday, Assad warplanes and helicopters intensified bombardment on the demilitarized zone (DMZ) of Idlib province, killing 21 civilians, including 10 children and injuring 97 others, including 32 children and 25 women.
The Syrian Network for Human Rights SNHR documented in its report released on (January 1) 43 massacres committed by Assad regime's militias and 22 massacres committed by Russian forces in 2019.
The report documented the deaths of 3,364 civilians in 2019, including 842 children and 486 women at the hands of the perpetrator parties to the conflict in Syria, including 234 in December.
Bombing by Russian-backed Assad militias in Syria has displaced more than 379,000 Syrians since last November.
More than 1 million Syrian IDPs live in 1395 camps in Northern Syria, of whom 121,832 IDPs live in 242 random camps, Mohammad Hallaj told Orient Net last week.