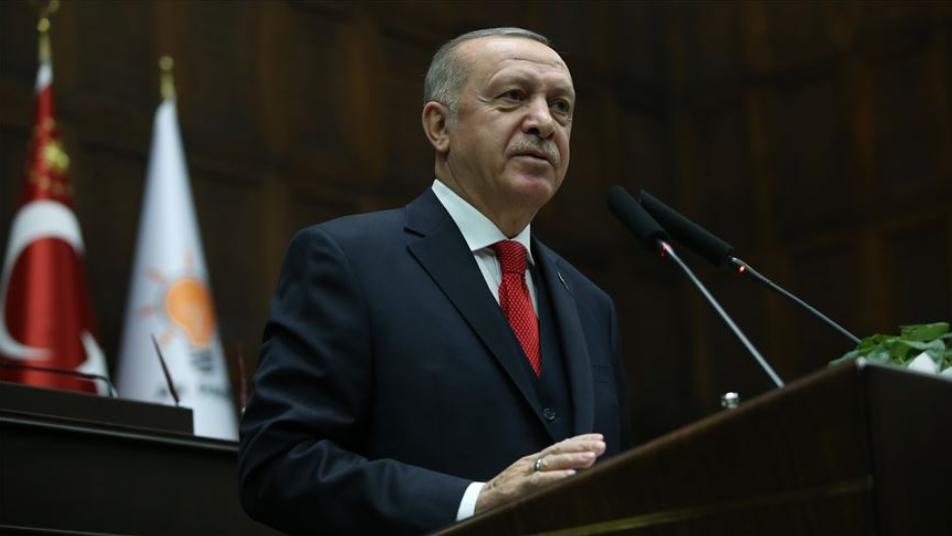 Turkish President Recep Tayyip Erdogan makes a speech in Ankara, Turkey on January 14, 2020. ( Murat Kula - Anadolu Agency )
Orient Net
Turkey is determined to step in to prevent Assad regime attacks in violation of the truce in Syria's Idlib, as 400,000 civilians are heading toward the Turkish border amid attacks, President Recep Tayyip Erdogan said Tuesday (January 14).
"We hope the cease-fire in Syria's Idlib is lasting. Turkey is determined to prevent Assad regime attacks in violation of the truce," Erdogan told a parliamentary group meeting in Ankara. Erdogan said Turkey's anti-terror operation in Syria allowed the country to smash the terror corridor in the region.
The president noted that there are serious discrepancies between promises made to Turkey [regarding Syria] and the actual situation on the field and that they have told relevant parties that Turkey will continue operations if necessary: "As long as the situation in Syria continues to be a matter of survival, it is not possible for us to take any steps back," he added.
Touching upon the international community's failure to take action on Idlib, Erdogan said Turkey will continue to uphold the truce. He continued by saying that Turkey plans to open a new border gate in Akcakale for passage of humanitarian aid to Syria, although the UN has not approved Turkey's request yet.
On Monday, Assad regime's militias shelled Maarat al-Nuaman city in the demilitarized zone (DMZ) of Idlib countryside, killing a civilian and injuring three others, violating a ceasefire announced by Russia and Turkish Defense Ministry on the 9th and 12th of January.
On Saturday, Assad warplanes and helicopters intensified bombardment on the demilitarized zone (DMZ) of Idlib province, killing 20 civilians, including 10 children and injuring 97 others, including 32 children and 25 women, violating a ceasefire announced by Russia on the 9th of January.
Russian Defense Ministry on Thursday announced a ceasefire, taking effect in the region at 02.00 p.m. local time (1200GMT).
On Friday, the Turkish Defense Ministry announced that Turkey and Russia had agreed on a cease-fire in Idlib set to start at midnight on Jan. 12.