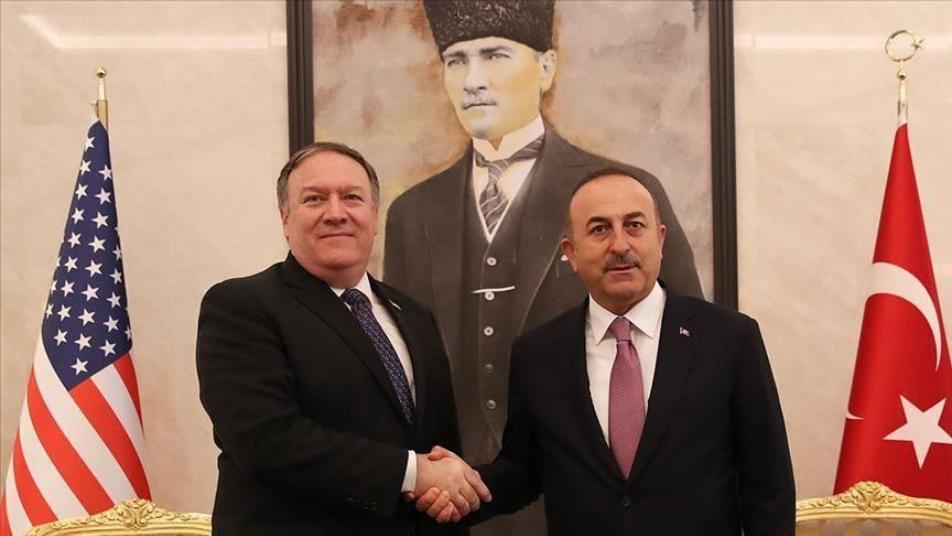 Orient Net
Turkish Foreign Minister Mevlut Cavusoglu discussed the latest developments in the Middle East with his US counterpart Mike Pompeo by phone Sunday (January 12), AA reported.
Pompeo “reiterated the need for NATO to play a greater role in the region and stressed the US commitment to the UN-facilitated peace process in Syria,” State Department spokeswoman Morgan Ortagus said in a statement.
Writing on Twitter, Pompeo said: “Had a good discussion on developments in the Middle East with Turkish Foreign Minister Cavusoglu today.”
Their phone conversation came after a ceasefire brokered by Turkey and Russia came into effect in Syria's Idlib province.
Russian Defense Ministry on Thursday announced a ceasefire, taking effect in the region at 02.00 p.m. local time (1200GMT).
On Saturday, Assad warplanes and helicopters intensified bombardment on the demilitarized zone (DMZ) of Idlib province, killing 20 civilians, including 10 children and injuring 97 others, including 32 children and 25 women, violating a ceasefire announced by Russia on the 9th of January.
On Friday, the Turkish Defense Ministry announced that Turkey and Russia had agreed on a cease-fire in Idlib set to start at midnight on Jan. 12.
Turkey and Russia agreed in September 2018 to turn Idlib into a de-escalation zone in which acts of aggression are expressly prohibited.
Since then, more than 1,300 civilians there have been killed in attacks by the Assad regime and Russia as the ceasefire continued to be violated.
Over 1 million Syrians have moved near the Turkish border due to intense attacks over the last year.