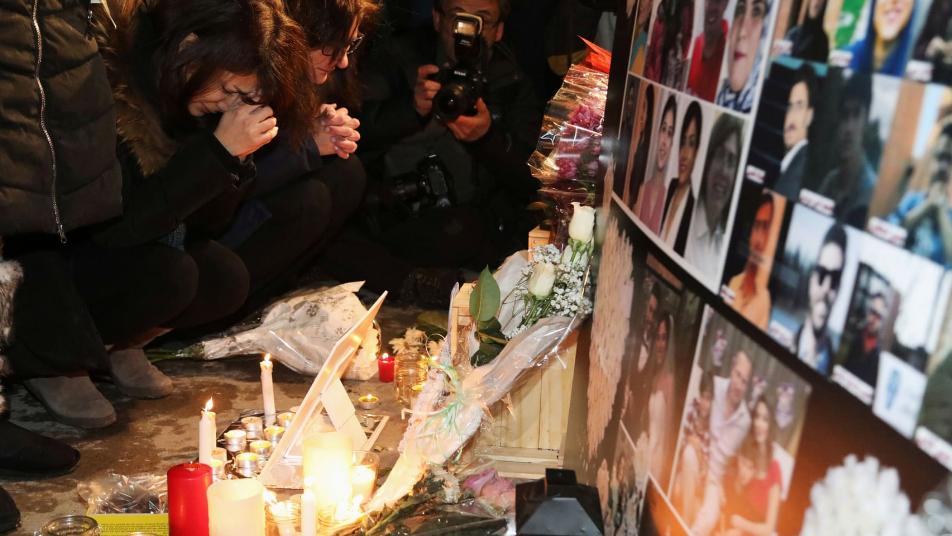 Mourners attend an outdoor vigil for the victims of a Ukrainian passenger jet which crashed in Iran, in Toronto, Ontario, Canada, on Thursday. Photograph: Chris Helgren/Reuters
Orient Net
After days of denials, Iranian regime has admitted that its military “unintentionally” shot down a Ukrainian airliner outside of Tehran on January 8, citing “human error” in the tragedy that claimed 176 lives.
The statement, reported by regime TV early on Saturday (January 11), quoted the military as saying the plane was mistaken for a “hostile target” after it turned toward a “sensitive military center” of the Islamic Revolutionary Guards Corps (IRGC).
It added that the military was at its “highest level of readiness" amid raised tensions with the United States.
The statement also said those responsible for the tragedy, which killed all aboard the plane, would "immediately" be brought to justice.
Although admitting its forces shot down the plane, Iranian regime attempted to put some of the blame on the United States, with Foreign Minister Mohammad Javad Zarif saying the incident occurred "at a time of crisis caused by US adventurism."
"A sad day. Preliminary conclusions of internal investigation by Armed Forces: Human error at time of crisis caused by US adventurism led to disaster," Zarif wrote on Twitter.
"Our profound regrets, apologies, and condolences to our people, to the families of all victims, and to other affected nations."
The head of the Iranian regime Hassan Rohani on Twitter called the incident a “great tragedy & unforgivable mistake.”
He wrote that the military’s “internal investigation has concluded that regrettably missiles fired due to human error caused the horrific crash of the Ukrainian plane & death of 176 innocent people.”
Until the admission, Tehran had vehemently denied allegations by Western leaders and experts that evidence indicated an Iranian missile had brought down the plane.
The Ukraine International Airlines (UIA) flight was en route to Kyiv from Tehran on January 8 carrying at least 57 Canadians, 82 Iranians, 10 Swedes, 10 Afghans, three Germans, and three Britons.
The Iranian statement came as the West had turned up the heat on Tehran, with the United States saying it was “likely” that an Iranian missile had shot down the craft and vowing to “take appropriate action in response.”
Pompeo said a probe into the incident would continue and that, when it is completed, he was “confident that we and the world will take appropriate action as a response."
Canadian Foreign Minister Francois-Philippe Champagne said Canada has formed a coordination group with Britain, Ukraine, Sweden, and Afghanistan to help families of victims.
Based on RFE, AP, AFP, Reuters and dpa