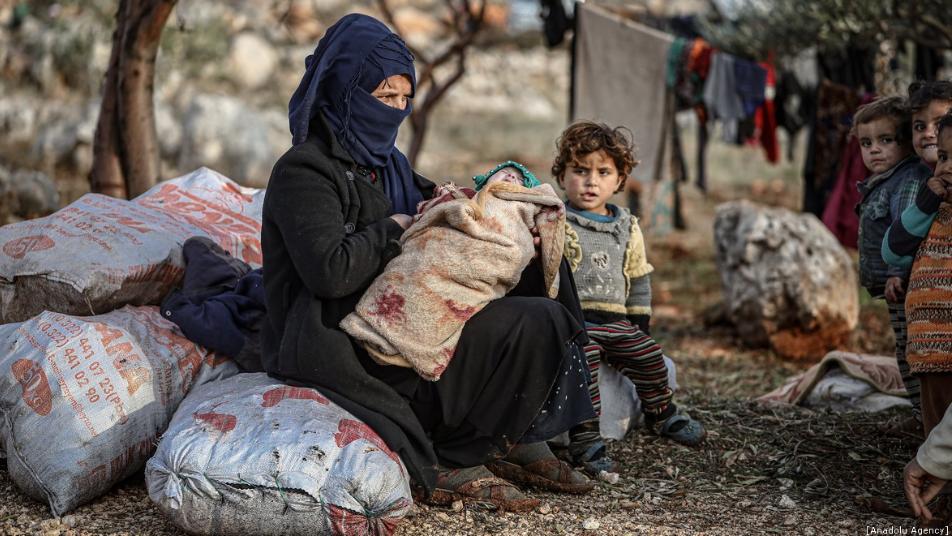 A Syrian family, who have been forced to displace due to attacks carried out by the Assad regime and Russia, is seen at a camp in Idlib, Syria on 28 December 2019 [Muhammed Said/Anadolu Agency]
Orient Net
Turkish interior minister says over 300,000 people displaced due to bombardments in Syria's northwestern Idlib province
Bombing by Russian-backed Assad militias in Syria has displaced more than 300,000 people in Idlib province in the northwest of the country, Turkey's interior minister said Tuesday (January 7).
Turkey will never abandon its neighboring countries, said Suleyman Soylu in the country's capital Ankara, adding that Turkey's Disaster and Emergency Management Presidency (AFAD) and the Turkish Red Crescent have helped many of the affected.
Turkey is continuing with intensive efforts to help all displaced people with its official and non-governmental organizations, Soylu underlined.
He said Turkey would never leave Syrian children to the bombardments and death.
Soylu also stressed Turkey's importance for the Middle East by, saying: "As long as Turkey has peace and stability, the region will have peace and stability."
Turkey and Russia agreed in September 2018 to turn Idlib into a de-escalation zone in which acts of aggression are expressly prohibited.
Since then, more than 1,300 civilians have been killed in attacks by the regime and Russian in the de-escalation zone as the cease-fire continues to be violated.
Over 1 million Syrians have moved near the Turkish border due to the intense attacks last year.
Based on AA