Forcibly displaced Syrian grandmother clings to life for her grandchildren 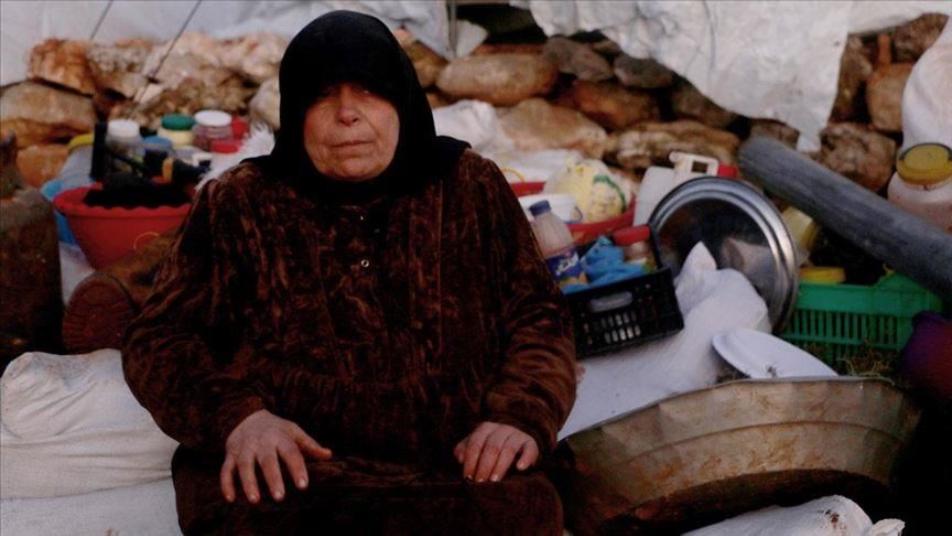 Orient Net
“Enough is enough!” said Um Ibrahim, a grandmother who lost both her husband and two sons during the Assad regime attacks in northern Syria’s Idlib province. She cried aloud in sorrow, stating her determination to survive for the sake of her granddaughters.
As one of the 1.3 million civilians who have been displaced due to constant attacks by the Assad regime and Russia which have been ongoing for almost a year now, Um Ibrahim suffers under the same living conditions as her fellow refugees.
“We have been living in mud, under heavy rain, in roofless houses as if we are homeless,” she said, explaining the circumstances in which they try to survive to the Anadolu Agency (AA).
The cold weather of winter months, continuous rain mixed with snow and the lack of food, fuel and shelter are only some of the elements that contribute to the already-broken families’ sorrow. Um Ibrahim tries to hold on to life under these circumstances alongside three of her granddaughters in a tent in a camp near the Turkish border.
Still, despite the harsh conditions, one thing is clear for Um Ibrahim: She would “rather be dead than hear the sounds of the (war) planes.”
Describing the situation in her hometown before their escape, the sorrowful woman said it was so “terrifying” that they had no other chance but to flee their house.
“Every day, eight helicopters, six to nine Russian aircraft and six or seven regime aircraft would attack. (As a result), we have escaped. What else we could have done? They bombed every part of our house. They have shot it with cannons. The roof has been shot. Even to get out of the village, we had to wait in line for two days,” Ibrahim explained.
Remembering the terrifying atmosphere caused by the warplanes, she said that still, whenever an aircraft goes by, she is shaken because she assumes it is another warplane ready to attack.
“From now on, I do not want to hear any more planes overhead,” Ibrahim said in a faltering voice.
“My heart melts with pain whenever I think that I will not be able to see my children buried in a graveyard again. I will not be able to see them. My heart cannot handle this,” she wept.
When it comes to her daily life in the camp, Ibrahim said time passes there with “tiredness, sorrow, rain and mud.” Unable to find a job due to the camp's significant distance from residential areas, Um Ibrahim and her family are at a point that they cannot even afford to buy bread.
“We owe a debt of 35,000 Syrian pounds ($68) to a baker. He will no longer sell us bread unless we pay that debt. Now, we have started to buy bread with a tab from another baker,” she said.
Um Ibrahim also had to leave most of her belongings out in the rain due to a lack of space in the tent.
“My only wish from God is to return to my home one day,” she said, calling on the whole world to provide aid to Syria.
Based on DS

UNICEF calls to protect Syrian children from carnage in Idlib