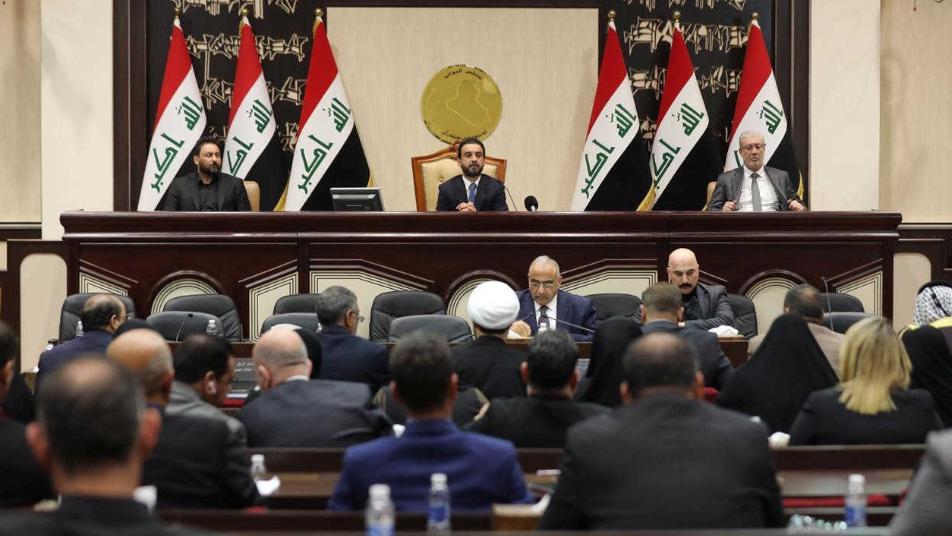 Members of the Iraqi parliament are seen at the parliament in Baghdad, Jan. 5, 2020. (Iraqi parliament media office/via Reuters)
Orient Net
Iraq’s parliament called on Sunday (January 5) for US and other foreign troops to leave as a backlash grows against the US killing of a top Iranian general, and President Donald Trump doubled down on threats to target Iranian cultural sites if Tehran retaliates.
Deepening a crisis that has heightened fears of a major Middle East conflagration, Iranian regime said it was taking another step back from commitments under a 2015 nuclear deal with six major powers.
Iran’s most prominent general, Qassem Soleimani, was killed on Friday in a US drone strike on his convoy at Baghdad airport, an attack that carried US-Iranian hostilities into uncharted waters.
An Iranian regime minister denounced Trump as a “terrorist in a suit” after the US president sent a series of Twitter posts on Saturday threatening to hit 52 Iranian sites, including targets important to Iranian culture, if Tehran attacks Americans or US assets to avenge Soleimani’s death.
Trump threatened sanctions against Iraq and said that if US troops were required to leave the country, Iraq’s government would have to pay Washington for the cost of a “very extraordinarily expensive” air base there.
He said if Iraq asked US forces to leave on an unfriendly basis, “we will charge them sanctions like they’ve never seen before ever. It’ll make Iranian sanctions look somewhat tame.”
The Iraqi parliament passed a resolution calling for an end to all foreign troop presence, reflecting the fears of many in Iraq that Friday’s strike could engulf them in another war between two bigger powers long at odds in Iraq and across the region.
While such resolutions are not binding on the government, this one is likely to be heeded: Prime Minister Adel Abdul Mahdi had earlier called on parliament to end foreign troop presence as soon as possible.
Based on Reuters