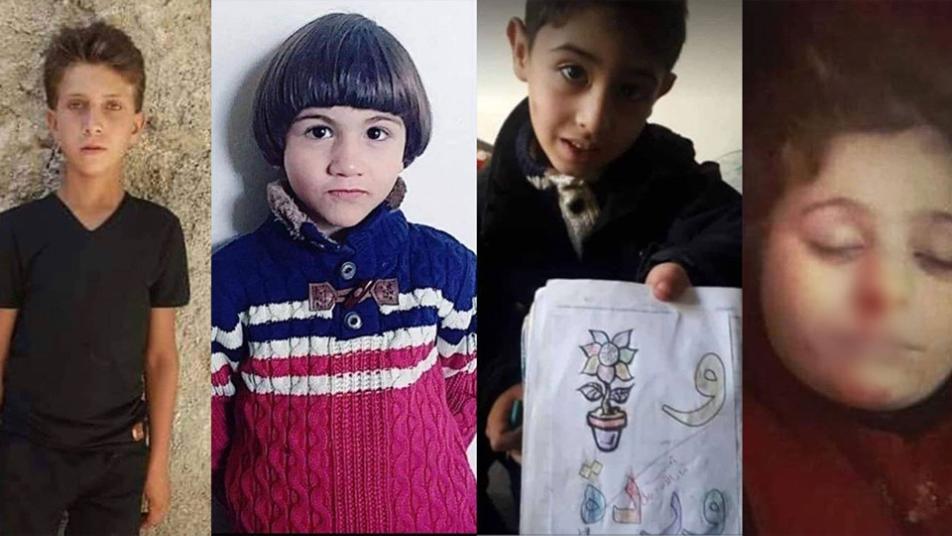 Abdul kader shakool, Yahya Sarmini, Ali Metaeb and Hoor Sergaway were among five children and four adults have been killed by Assad missile that hit Abdo Salama school in Sarmin town on New Year's Day
Orient Net
Five children and four adults have been killed by a missile that hit a school and a camp for displaced people in Syria’s Idlib region, the latest attack on civilian infrastructure in opposition held areas.
“Fortunately, most students had left only 10 minutes before the bombing, but there were some still playing in front of the school,” said Mustafa Al Rashid, 31, a spokesman for the civil defence office in the town of Sarmin.
He was in his office when the explosion went off just before midday and raced to the scene to find dead and injured women and children lying in the road beside schoolbags spattered with blood.
The missile landed in a street between the school and the camp, damaging both. Nineteen people were injured, including a teacher who is in a critical condition.
First responders had feared a higher death toll because the missile struck a densely populated area where dozens of students are usually in their classrooms.
Sarmin lies to the east of Idlib city and has recently become a sanctuary for displaced people fleeing a campaign of aerial bombing and ground attacks launched by Assad militias. More than 235,000 civilians have left their homes in the past few weeks, the UN has said.
The missile appeared to have dispersed cluster bombs, survivors said. Abu Omar runs an internet cafe 20 metres from the school gate and was turning his generators on when he heard the first explosion and dropped to the ground instinctively. He lived in besieged areas of Homs city, so is familiar with the sound of different bombs, he said. “After the first sound, I started hearing multiple consecutive explosions, therefore I recognised we were targeted with cluster bombs. I got a fragment in my left leg while the cluster bombs were still exploding so I crawled inside my cafe until the explosions stopped,” he said.
Naji Al Mustafa, the spokesperson of the National Front for Liberation (NLF) militia said missile fragments recovered from the site suggested it was a Russian-made Tochka surface-to-surface missile with a range of between 70 and 90 kilometres. “This missile is a container of cluster bombs which opens before it reaches its target, so the bombs fall to cover an area of about 100 square metres,” he said.
The Tochka missile has been used to hit residential areas before, he said, including the bombing of a displacement camp and hospital in November in which at least 22 people were killed.
Attacks on schools are also a hazard for civilians in the area. Local monitoring groups say 27 in opposition held areas were hit in December, as well as dozens of hospitals and medical facilities over the year.
Aid agencies have repeatedly warned that attacking Idlib puts the lives of 3 million civilians in danger and could trigger the worst humanitarian disaster of a war that has lasted nearly a decade.
Originally home to about a million people, the province’s population has been swollen with civilians displaced by fighting elsewhere in the country.
Based on Guardian