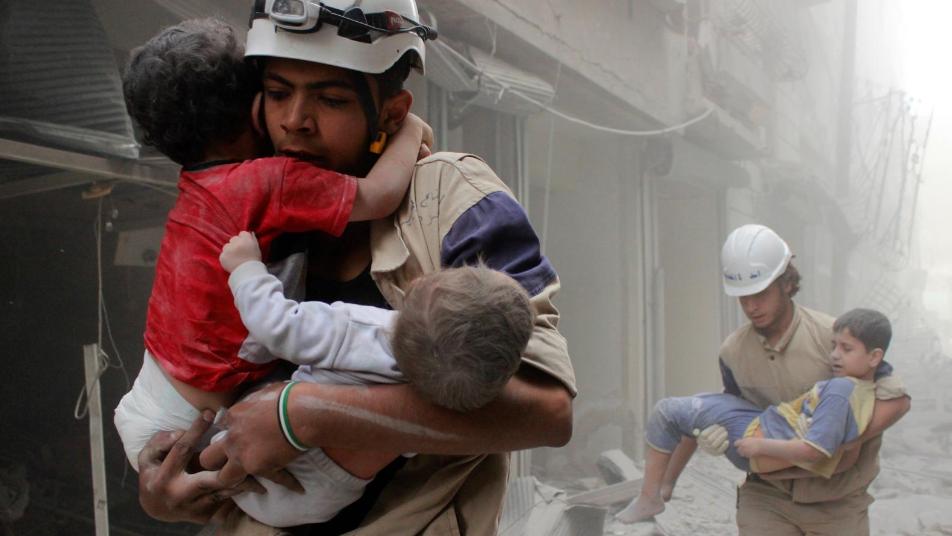 In the streets of besieged Idlib a man passed out sweets Friday (January 3) to celebrate the US airstrike that killed a commander who has been at the center of Syria’s war from the beginning: Qasem Soleimani.
The Iranian major general, both revered and reviled as a key military strategist for Tehran’s leaders, had been steering events in the Middle East for decades. As the commander of the Quds Force, which runs foreign operations for Iran’s elite Revolutionary Guard, he was held responsible by US officials for supporting Iranian-backed militias in Iraq that targeted US soldiers and allied forces after the US-led invasion in 2003.
But in Syria, as well as elsewhere in the Middle East, Soleimani has had an even more devastating reach. He was a point man for Iranian regime’s backing of Bashar al-Assad and helped shape the Assad military strategies in a horrific war that began with pro-democracy protests in 2011.
Aiding Assad
When peaceful protesters rose up against Assad in March 2011, Iranian regime’s supreme leader, Ayatollah Ali Khamenei, came to his ally’s aid. Iranian regime provided loans, oil and financial assistance to skirt international sanctions. Tehran and its regional proxies, such as Lebanon’s Hezbollah, also were a conduit for weapons, battlefield training and fighters — all vital support for Assad until Russia sent warplanes and other aid in 2015 to finally tip the scales in Assad’s favor. Soleimani was reportedly the main man in Syria coordinating this all and doing Tehran’s bidding.
Soleimani is almost resident in Damascus, or let’s say he goes there a lot and you can find him between meetings with Assad and visits to the theater of operations like any other soldier, a senior regional official told Reuters in 2015.
Just two years before Syria’s unraveling began, Iranian regime’s leaders faced their own unrest. Major protests broke out across the Islamic Republic in 2009 amid claims that the outcome of the presidential election was manipulated to hand victory to Mahmoud Ahmadinejad over reformist rivals. Iranian regime’s Revolutionary Guard led the crackdowns — with Soleimani and others at the helm.
__new_in_first_article1__
In the Syrian uprising’s early months in 2012, Soleimani “helped orchestrate the regime’s vicious response to opposition attacks inside Damascus and to the threats of a palace coup,” according to Sam Dagher in his book “Assad or We Burn the Country.”
Soleimani’s knowledge of Arabic helped him to win over local commanders and build up Assad’s support network. Already by 2012, the US Treasury Department imposed sanctions on Soleimani for his role in “the violent repression against the Syrian people.” A then-rare photo of the commander from 2014 in Syria showed him offering condolences to the family of the Assad’s cousin, Hilal al-Assad, who was killed in battle near the border with Turkey.
That same year, Soleimani called on a close friend in Iraq, the transportation minister, to allow planes loaded with military support for Assad to fly through Iraqi airspace, according to cables published by the New York Times and the Intercept.
In February, Assad made his first visit to Tehran since the war began to see Khamenei. Soleimani sat next to Assad in the meeting. His support for Assad’s army “will not be forgotten,” Assad said Friday.
Sectarian fighters
Soleimani also helped Assad with fighters — a mix that included Hezbollah, the Revolutionary Guard, affiliated militia fighters and hired hands from Iraq, Afghanistan and Pakistan. Soleimani’s role as commander of the Quds Force enabled him to draw from a wealth of proxy fighters, some of whom then received training from Hezbollah operatives in bases in Iran and Syria.
“To save Assad, Suleimani has called on every asset he built since taking over the Quds Force: Hezbollah fighters, Shiite militiamen from around the Arab world, and all the money and materiel he could squeeze out of his own besieged government,” the New Yorker’s Dexter Filkins wrote in a 2013 profile.
He added: “This kind of starkly sectarian atmosphere may be Suleimani’s most lasting impact on the Middle East. To save his Iranian empire in Syria and Lebanon, he has helped fuel a Sunni-Shiite conflict that threatens to engulf the region for years to come — a war that he appears happy to wage.”
__new_in_first_article2__
Iranian regime has denied sending soldiers to Syria, despite reports otherwise, though Iranian media has reported on funerals for “military advisers” killed in Syria.
Relations with Russia
In the summer of 2015, Soleimani defied a UN-imposed travel ban and visited Russia to coordinate Moscow’s military intervention in Syria. According to Reuters, Soleimani and his Russian counterparts set up an agreement: A Russian airstrike campaign would accompany the ground battles led by Iranian, Assad and Hezbollah fighters. Russia’s air assaults ultimately helped shift the war in Assad’s favor.
“Soleimani put the map of Syria on the table,” a senior regional official told Reuters at the time. “The Russians were very alarmed, and felt matters were in steep decline and that there were real dangers to the regime. The Iranians assured them there is still the possibility to reclaim the initiative. At that time, Soleimani played a role in assuring them that we haven’t lost all the cards.”
Just between April and November 2019, Assad and Russian bombing campaigns in northwest Idlib province killed 1,300 and displaced more than 1 million people, according to Syria Campaign, a monitoring group based in Britain.
By Miriam Berger
Edited according to Orient Net
Link to the original source of the Washington Post
قيم هذا المقال 14 0