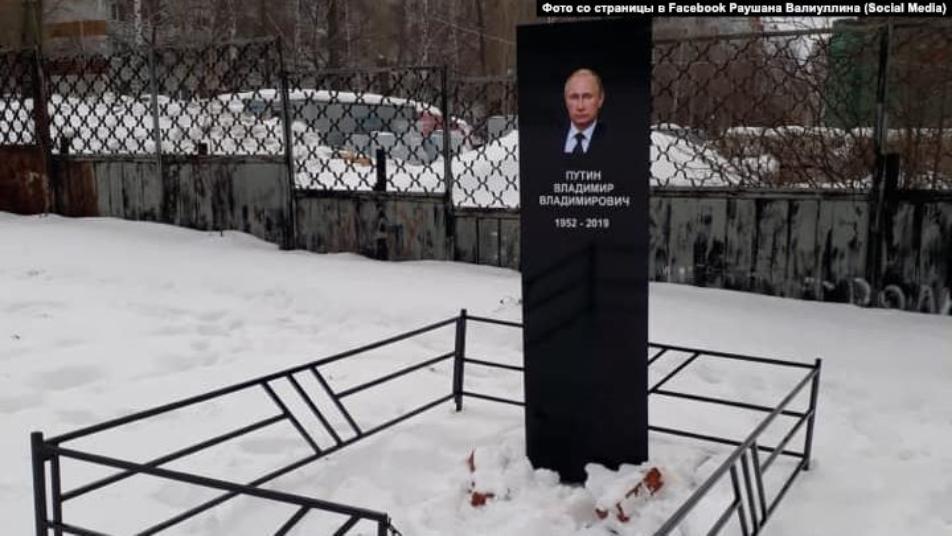 The gravestone bore Putin's photo, full name, and the dates 1952-2019. (file photo)
Orient Net
Police in Russia's Tatarstan have searched the home of a local civil rights activist after his Internet show mocked President Vladimir Putin, his spokesman Dmitry Peskov, and Igor Sechin, the powerful chief of Russian oil giant Rosneft.
Karim Yamadayev told RFE/RL on Friday (January 3) that police had just searched his home in the city of Naberezhnye Chelny.
The searches were linked to his comedy show, titled Judge Gramm, which he posted online in December, he said.
In one of these episodes, a person playing the role of a judge sentences to death two men whose heads are covered with black sacks with the inscriptions "Dmitry Peskov" and "Igor Sechin."
Another man in the show portrays a third defendant who also has his head covered with a black sack saying "Vladimir Putin."
The judge in the show says that Putin's trial "will take place in a week" during the next episode.
The video was accompanied with a text saying that the show was "the work of authors and actors united exclusively by artistic ideas and not seeking to propagate violence or incite hatred to any social group."
According to Yamadayev, police confiscated his computers, payment cards, and scripts for his show. After the search, he was taken to Investigative Committee headquarters in the city, where he was officially informed that he was suspected of insulting authorities, though he was not yet been charged.
In March last year, Yamadayev was sentenced to 28 days in jail for putting up a mock gravestone for President Putin in Naberezhnye Chelny.
Based on RFE