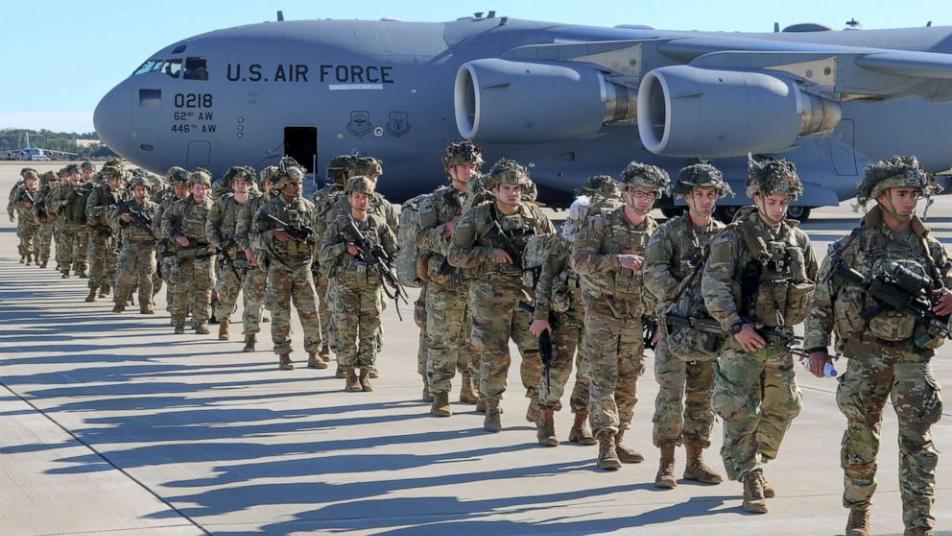 Jan. 1, 2020. The Immediate Response Force is being deployment to Baghdad following violent protesters that attacked the US Embassy compound Capt. Robyn Haake/US Army
Orient Net
The United States is sending nearly 3,000 additional troops to the Middle East from the 82nd Airborne Division as a precaution amid rising threats to American forces in the region, the Pentagon said on Friday (January 3).
A senior US official, speaking on condition of anonymity, said additional US deployments were also being weighed, including sending elements of the Europe-based 173rd Airborne Brigade for tasks like embassy protection in Lebanon.
Iranian regime promised vengeance after a US air strike in Baghdad on Friday killed Qassem Soleimani, Tehran’s most prominent military commander and the architect of its growing influence in the Middle East.
The overnight attack, authorized by President Donald Trump, was a dramatic escalation in a “shadow war” in the Middle East between Iran and the United States and its allies.
The Pentagon said the Immediate Response Force (IRF) brigade of the 82nd Airborne Division was being deployed.
“The brigade will deploy to Kuwait as an appropriate and precautionary action in response to increased threat levels against US personnel and facilities, and will assist in reconstituting the reserve,” the Pentagon said in a statement.
The troops will be joining the roughly 750 forces that were sent to Kuwait earlier this week. Usually, a brigade consists of about 3,500 people.
US officials told Reuters earlier this week that thousands of additional troops could be sent to the region and had been told to prepare to deploy.
The United States has already dispatched about 14,000 additional troops to the Middle East since May.
Reuters first reported on Friday that US Defense Secretary Mark Esper had canceled plans to take personal leave later in January amid rising tension with Iranian regime.
The US air strike followed a sharp increase in US-Iranian hostilities last week when pro-Iranian militiamen attacked the US embassy in Iraq following a US air raid on the Kataib Hezbollah militia.
The State Department has urged US citizens to leave Iraq.
Iraq’s prime minister said that with Friday’s attack Washington had violated a deal for keeping US troops in his country.
Based on Reuters