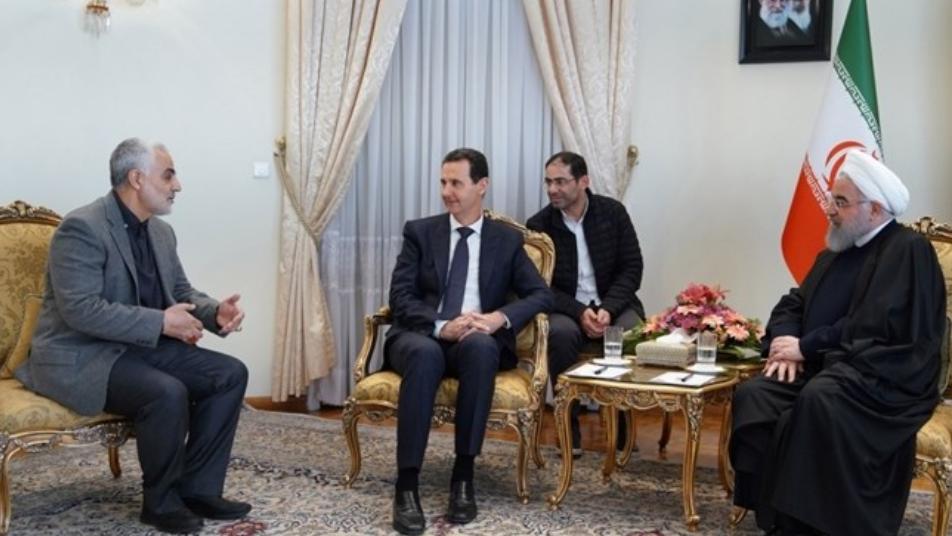 Assad during a meeting with Soleimani, left, and Rouhani in Tehran

Today the United States killed Major General Qassem Soleimani, the commander of the Iranian Revolutionary Guard Corps’s Quds Force. The United States is now in a hot war with Iranian regime after having waged war via proxies for the past several decades.
This doesn’t mean war, it will not lead to war, and it doesn’t risk war. None of that. It is war.
I don’t claim to be an expert on Iran—when I served as deputy assistant secretary of defense for Middle East policy, I used to remind my Iran team at the Pentagon that my regional expertise ended at the Shatt al-Arab waterway that divides Iraq and Iran, and with them, the Arabic- and Farsi-speaking regions of the Middle East.
But I do know something of how important Qassem Soleimani was, because he spent more time in the Arabic-speaking world—propping up Iranian allies from Iraq to Lebanon, and from Syria to Yemen—than he did back home in Iran. From a military and diplomatic perspective, Soleimani was Iranian regime’s David Petraeus and Stan McChrystal and Brett McGurk all rolled into one.
And that’s now the problem Iran faces. I do not know of a single Iranian who was more indispensable to his regime ambitions in the Middle East. From 2015 to 2017, when we were in the heat of the fighting against the ISIS in both Syria and Iraq, I would watch Soleimani shuttle back and forth between Syria and Iraq. When the war to prop up Bashar al-Assad was going poorly, Soleimani would leave Iraq for Syria. And when Iranian-backed militias in Iraq began to struggle against ISIS, Soleimani would leave Syria for Iraq.
__new_in_first_article1__
That’s now a problem for Iran. Just as the United States often faces a shortage of human capital—not all general officers and diplomats are created equal, sadly, and we are not exactly blessed with a surplus of Arabic speakers in our government—Iranian regime also doesn’t have a lot of talent to go around. One of the reasons I thought Iran erred so often in Yemen—giving strategic weapons such as anti-ship cruise missiles to a bunch of undertrained Houthi yahoos, for example—was a lack of adult supervision.
Qassem Soleimani was the adult supervision. He was spread thin over the past decade, but he was nonetheless a serious if nefarious adversary of the United States and its partners in the region. And Iran and its partners will now feel his loss greatly.
I don’t know, and I’m not willing to argue one way or the other, whether that fact justifies Soleimani’s killing. The United States is claiming it acted because Soleimani was making plans to attack US diplomats and troops in the Middle East and because Soleimani had recently orchestrated other attacks on coalition bases in Iraq. Soleimani was at least partially, and in many cases directly, responsible for dozens if not hundreds of attacks on US forces in Iraq going back to the height of the Iraq War. So unlike some other claims this administration has made, what the Trump administration is claiming here would not surprise me—to say the least—if it were indeed true.
I also do not claim to know how any of these ends. I don’t think anyone can say for certain how Iranian will respond, or how the United States and its partners are prepared—or not prepared—to weather that response. The only thing I know for certain is that the people of the Middle East will suffer greatly in the weeks ahead. Which, sadly, has been a safe bet for far too long.
By Andrew Exum
Link to the original source of the Atlantic
قيم هذا المقال 25 0