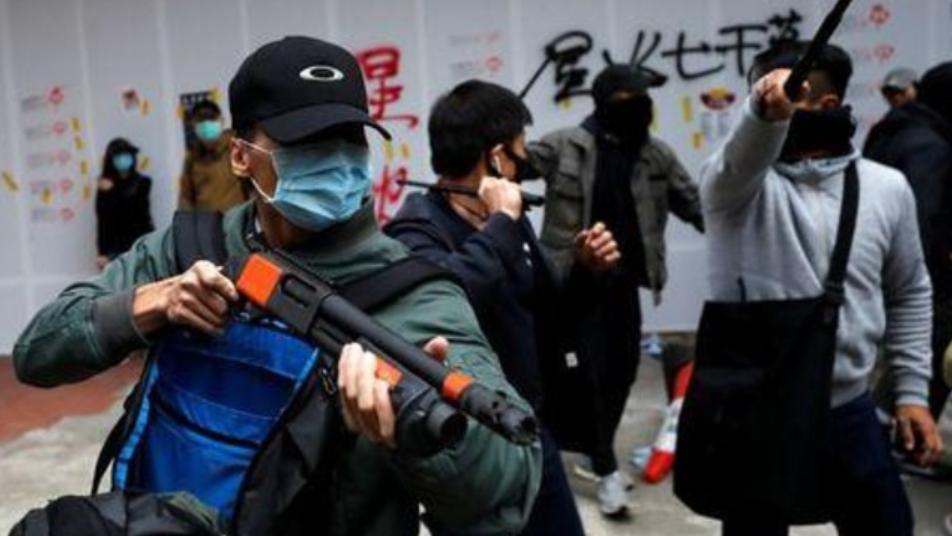 A police officer holds a weapon during an anti-government demonstration on New Year's Day to call for better governance and democratic reforms in Hong Kong, China, January 1, 2020. REUTERS/Tyrone Siu
Orient Net
A peaceful march drawing tens of thousands of anti-government protesters on New Year’s Day spiraled into chaotic scenes as police fired several rounds of tear gas at crowds including families and some protesters threw several petrol bombs.
The violence broke out during a largely peaceful march as masses of regular citizens pressed authorities for further concessions in the Chinese-ruled city.
In the Wanchai bar district, some protesters had spray-painted graffiti and smashed cash machines in an HSBC bank branch when plainclothes police moved in, pepper-spraying crowds in a tense face-off, after which several rounds of tear gas were fired.
The protesters, many masked and clad in black, regrouped and formed their own line, hurling several petrol bombs and unfurling umbrellas.
Protesters have directed their ire at the global banking group HSBC saying that it had closed an account that had been a fund-raising platform for the protest movement, a claim the bank has strongly denied.
Earlier in the day, under grey clouds, citizens young and old, many dressed in black and some masked, carried signs such as “Freedom is not free” before setting off.
He was referring to the push for concessions from the government including full democracy, an amnesty for the more than 6,500 people arrested so far, and a powerful, independent investigation into police actions.
The pro-democracy march is being organized by the Civil Human Rights Front, a group that arranged a number of marches last year that drew millions.
Along the route, a number of newly elected pro-democracy district politicians mingled with the crowds on their first day in office, some helping collect donations to assist the movement.
Thousands of Hong Kong revelers had earlier welcomed in 2020 on neon-lit promenades along the skyline of Victoria Harbour, chanting the movement’s signature slogan - “Liberate Hong Kong. Revolution of our Time” - for the final seconds before clocks struck midnight.
A sea of protesters then surged down Nathan Road, a major boulevard, blocking all lanes in a spontaneous march breaking out within minutes of the new decade. Some held signs reading “Let’s keep fighting together in 2020.”
Overnight, police fired tear gas, rubber bullets and water cannons during some brief standoffs.
Many people in Hong Kong are angered by Beijing’s tight grip on the city which was promised a high degree of autonomy under this framework when the former British colony returned to Chinese rule in 1997.
Based on Reuters