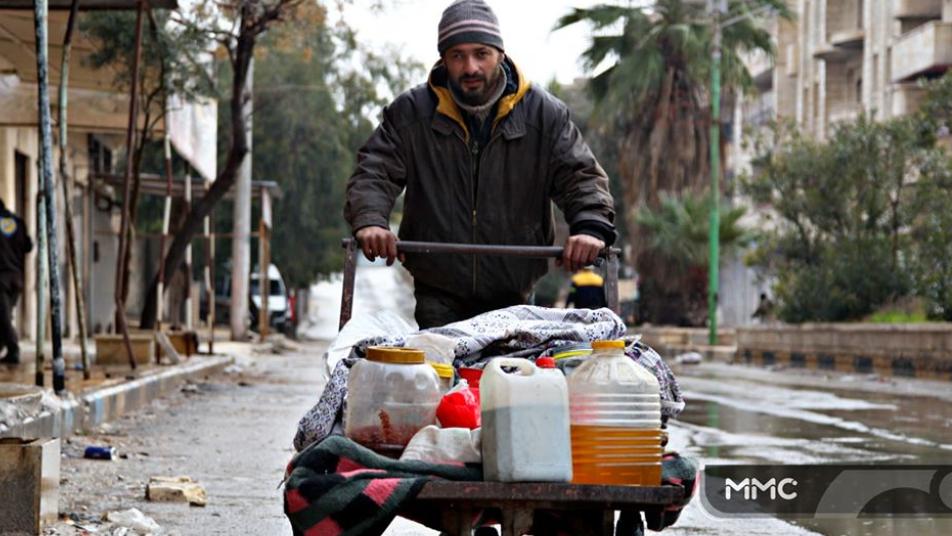 Civilian felling his home in Maarat al-Nuaman as Assad terrorists advancing to it
__new_Underarticle_image_EN__
Orient Net
SYRIAN DICTATOR Bashar Assad and his Russian and Iranian allies have for years pursued a bloody but systematic strategy for regaining control over rebel-held areas. The regime launches brutal assaults aimed at driving out civilians, deliberately bombing hospitals, schools and markets.
After gaining some ground, it responds to international pressure by agreeing to a cease-fire. Then, after a few weeks or months of respite, it repeats the process.
Thus it was that Syrian (Assad) and Russian forces began a new offensive in the northern province of Idlib last week, once again targeting civilians and, according to humanitarian aid groups, driving more than 100,000 people toward the border with Turkey.
The attack is the resumption of a push into the province that began last April and displaced more than 500,000 people before an August cease-fire.
Humanitarian aid groups say the current offensive could soon double that number, leaving tens of thousands of people living in the open in harsh winter conditions.
Turkey long ago sealed its border with Syria, meaning the refugees have no safe place to go.
__new_in_first_article1__
Idlib has long posed a complex problem for Turkey and Western governments. Its population of some 3 million people, including many thousands of refugees from other parts of Syria, is largely controlled by an extremist offshoot of al-Qaeda, Hayat Tahrir al-Sham.
But the Syrian (Assad) and Russian tactics for reconquering the province are aimed mostly at innocent civilians.
Turkey promised last year to disarm the extremists but, while it has set up its own military outposts in Idlib and backed other opposition forces, it has failed to deliver. This week, its diplomats once again were reduced to pleading with Russia to stop the offensive.
The United States, which once did the bargaining with Moscow, has become an impotent observer. “Russia, Syria, and Iran are killing, or on their way to killing, thousands of innocent civilians in Idlib Province. Don’t do it!” President Trump tweeted Thursday. He responded to the last offensive with a similar tweet — and nothing else.
As Mr. Trump’s tweet indicated — “Turkey is working hard to stop this carnage” — President Recep Tayyip Erdogan has the best chance of preventing the looming humanitarian catastrophe.
Still, it should be clear who is responsible for the latest wave of Syrian suffering: the Assad regime and Russian President Vladi­mir Putin. Congress recently approved new legislation sanctioning the Syrian government (regime) and all who do business with it, including Russia; legislators should insist that it be rigorously enforced.
The report is taken from Washington Post