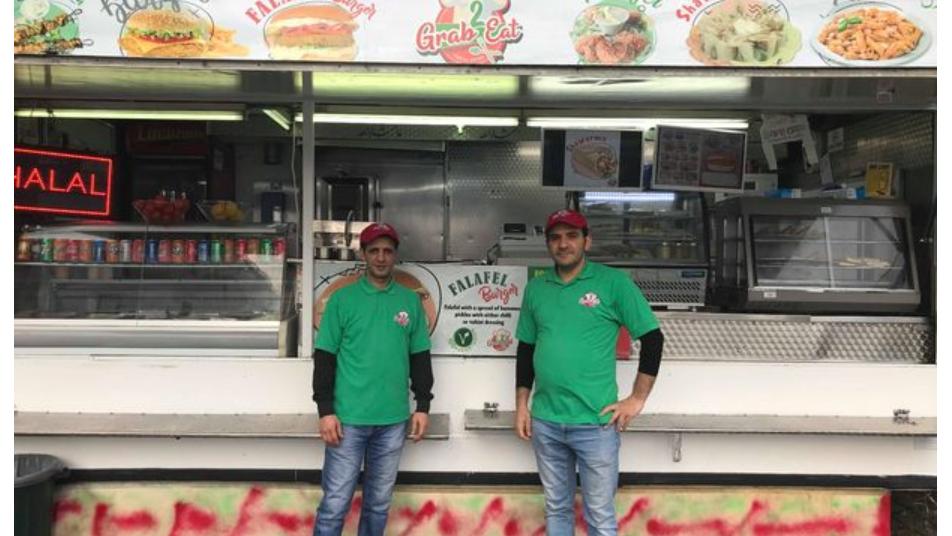 Two Syrian refugees become business success in Birmingham
__new_Underarticle_image_EN__
Orient Net
Two Syrian refugees who have big dreams for a street food business started their job in Birmingham city centre.
Hayan Anjari, 50, and Yousef Almotlak, 37, fled their war-torn homeland with their families two years ago.
Both men brought their wives and three children to Birmingham after it became a City of Sanctuary
Back in Syria, Hayan was a football coach while Yousef was a salesman - but both had a goal of one day working for themselves.
Now they are doing just that after launching a food truck business near the Bullring Market two months ago.
And they hope the booming success of Grab2eat can one day help them fulfil their ultimate goal - opening their own restaurant.
Hayan said: "We left Syria to escape war. I brought my wife and three children with me. We stayed in Lebanon for a while before coming to the UK.
"We are creating a beautiful life here in Birmingham and we're starting to feel like Brummies now.
__new_in_first_article1__
"My children are settling well into school and my wife is going to college to study English language.
"Yousef and I met here when we arrived in the city and became good friends.
"We decided to go into business together because we share the same dreams. We hope to one day turn our business into a bigger restaurant."
Hayan told Birmingham Live how welcoming he found Birmingham and that locals have been very supportive of the food truck since it opened.
They received support from Birmingham City Council and Refugee Action to get started.
He said: "There is so much freedom here and lots of well organised support.
"Here, we have rights and opportunities. We love that everything is in place for us to achieve our dreams and aspirations.
"We are very thankful for all the help and support to get settled and their new business started."
__new_in_first_article2__
Neither Hayan or Yousef spoke English when they first arrived in the UK. But they were determined to learn the language to integrate themselves into British life and be able to work to support their families.
They were supported through the Refugee Action Syrian Employment Project.
Hayan initially landed volunteer work as a football coach with a community football team before moving into his first paid role working in a warehouse, packing fruit & vegetables.
Refugee Action also supported Yousef by matching him with an English speaking mentor to help improve his employment prospects. The charity also gave him access training on becoming self-employed.
Employment Project Coordinator at Refugee Action, Julie Barton, said: “We are immensely proud of how hard Hayan and Yousef have worked and how much they’ve achieved within just two years of arriving in the UK. We wish them every success in their business venture.”
Grab2eat sells budget-priced fast food with an Halal menu covering everything from falafel and pasta to shawarma.
The food truck is located in the City Centre on Upper Dean St - B5 4RB.
Click here for the original link