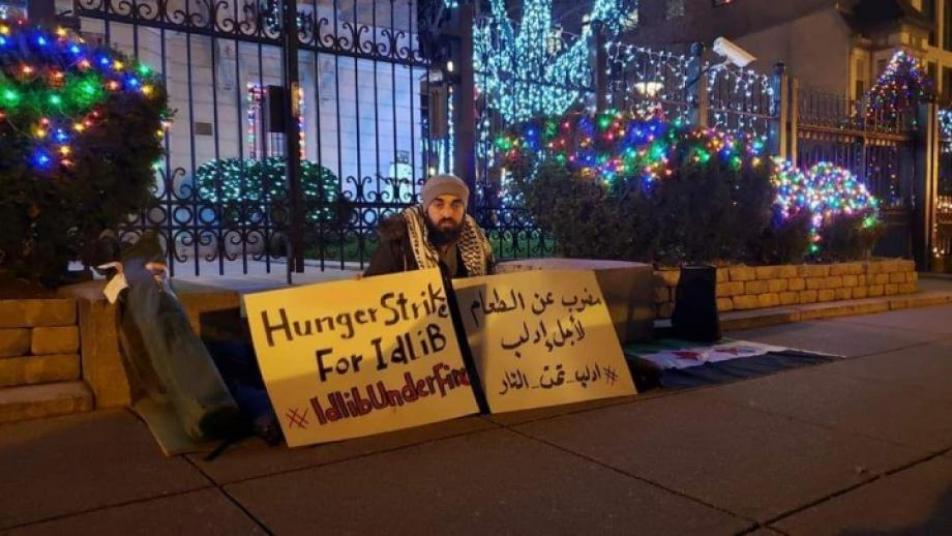 Orient Net
Syrian activist Remi Hassoun began a hunger strike in front of the Russian ambassador's residence in Washington on Sunday (December 22).
Hassoun announced his hunger strike on a note posted on Facebook page and he also had a sign in which he wrote: Hunger Strike For Idlib #Idlibunderfire.

Remi is launching his protest over the brutal bombing campaign launched by Russian warplanes and Assad militiamen on Idlib, killing, injuring and displacing hundreds of thousands of Syrian civilians in this extreme weather.
Remi says he hits his percussion overnight to deprive the Russian ambassador of sleeping.
“I will go on with my hunger strike. This is my third day. God willing I will go on. No one has joined me in this hunger strike, but many people have stopped and asked me about the reason behind my act and about the tragic events in Syria,” Remi told Orient News’ Follow Up show in a phone call on Wednesday.

A representative from the Russian embassy came to negotiate with me to end my hunger strike, she also asked me to tell her my demands to be considered by the Russians, Remi added.
Russians fear the media to cover my hunger strike and smear their reputation which is already bad.
Displaced Syrians from Idlib speak of their ordeal as they travel towards the Turkish border to flee an offensive heading into Idlib.

Assad and Russian militiamen have recently intensified their bombardment of targets around the city of Maarat al-Numan in Idlib, prompting a wave of refugees to flee towards Turkey and killing and injuring hundreds of Syrians.