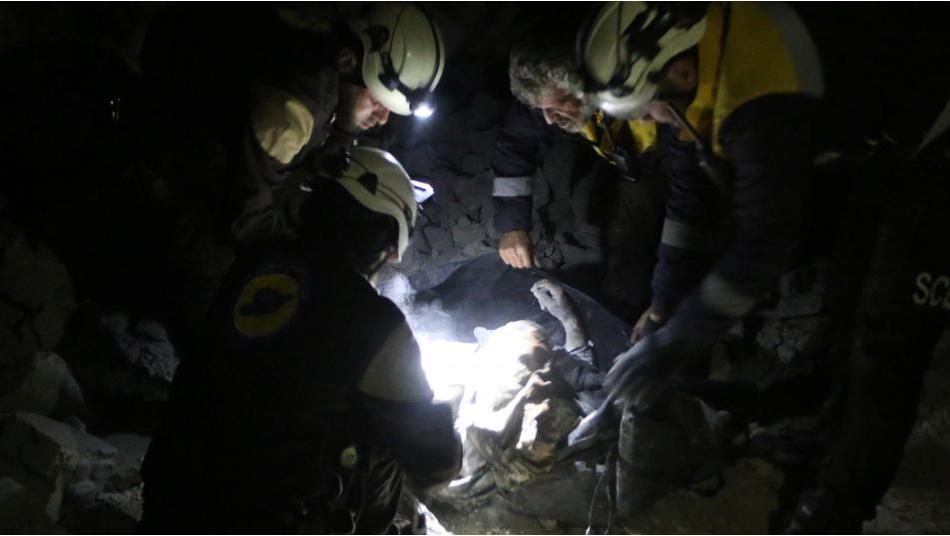 Assad-Russian night aerial attacks kill civilians in eastern Idlib
__new_Underarticle_image_EN__
Orient Net
Russian warplanes flown by Assad terrorist pilots conducted night airstrikes on the eastern countryside of Idlib on Sunday (December 22), killing and injuring civilians, Orient correspondent said.
White Helmets volunteers recovered the bodies of an old man and an old woman, from under the rubble, who lost their lives by the Assad airstrikes in the town of Deir Sharqi.
Five other civilians were killed by similar airstrikes in the Idlib countryside's Maasaran.

Locals said that the old people were intending to leave their homes but the heavy bombardment of Assad terrorists delayed their movement.
__new_in_first_article1__
At least twelve civilians, including three children were killed and others were injured on Saturday (December 21) after Assad warplanes and Assad helicopters bombed Idlib countryside. The biggest death toll was in Saraqib; at least 8 civilians were killed in a popular marketplace.

A drone strike killed also on Saturday a child and injured his father in the surrounding of Bidama town.
Assad-Russian warplanes have committed four massacres in Idlib countryside since the 15th of December, killing 61 civilians, including 18 children and 15 women and injuring 135 civilians, including 50 women and children, largely violating the de-escalation zone deal reached between Russia and Turkey.