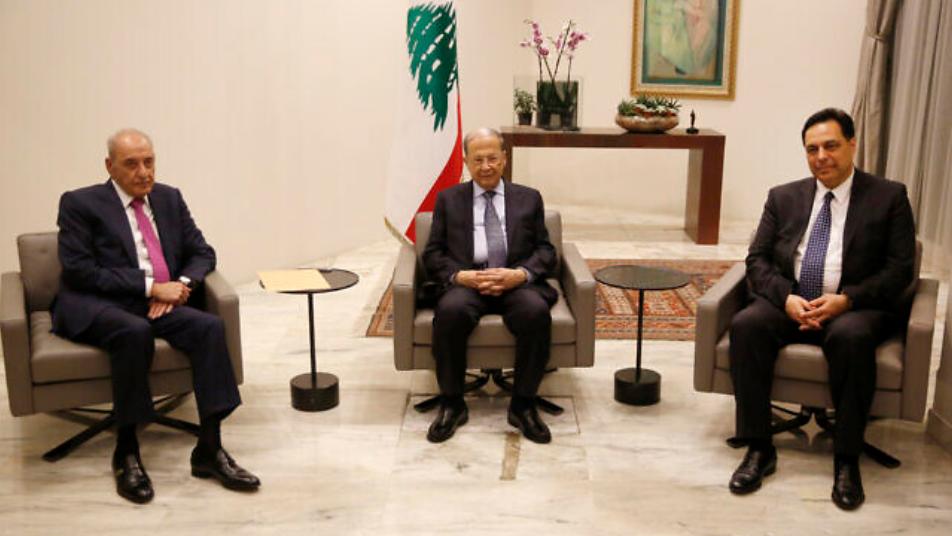 Lebanese President Michel Aoun meets with Lebanese newly-assigned Prime Minister, Hassan Diab and Parliament Speaker Nabih Berri at the presidential palace in Baabda, Lebanon, December 19, 2019. (AP Photo/Hussein Malla)
Orient Net
Crisis-hit Lebanon's president Thursday (December 19) designated Hezbollah-backed academic and former minister Hassan Diab as the country's new prime minister, ending nearly two months of political wrangling.
The little-known 60-year-old engineering professor at the American University of Beirut (AUB) will replace outgoing premier Saad Hariri amid nationwide anti-government protests and the worst economic crisis since Lebanon's 1975-1990 civil war.
The self-styled independent was thrust forward as a candidate with the backing of parliamentary blocs affiliated with Shiite movements Hezbollah and Amal as well the Free Patriotic Movement (FPM), founded by Christian President Michel Aoun.
But the career academic who held the education portfolio in a government formed after Hezbollah brought down a previous Hariri cabinet did not receive the backing of Sunni blocs or their own Christian allies.
His nomination, as a result, will yield a lopsided government that observers warn could fuel sectarian tensions and complicate efforts to secure international aid needed to pull Lebanon back from the brink of default.
In his first remarks since his designation, Diab pledged to form a government "as soon as possible," saying he will start consultations with political parties and representatives of the popular movement on Saturday.
He addressed protesters by saying their "uprising represents me".
Their voices, he said, "should remain a warning bell that the Lebanese will no longer allow a return to conditions before 17 October", the date the protests started.
Hariri resigned seven weeks ago under pressure from an unprecedented wave of protests demanding a complete overhaul of the political system, leaving the country without a government to tackle its worst ever economic crisis.
A government dominated by Hezbollah, which has been targeted by increasingly biting US sanctions, is not likely to secure billions of dollars in frozen aid.
The Lebanese pound, officially pegged to the US dollar, has lost around 30 percent of its value on the black market, while companies have been paying half-salaries over the past two months, as well as laying off employees.
Based on AFP