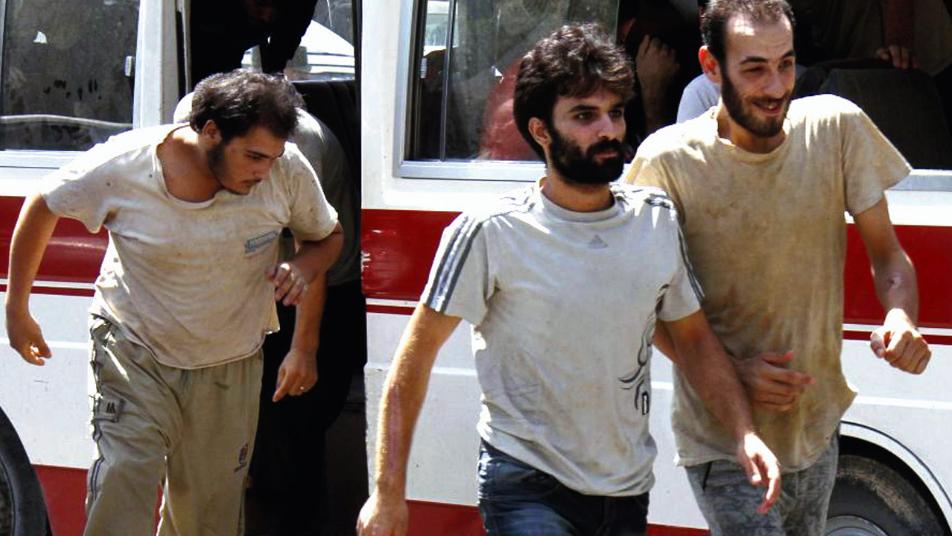 Syrian detainees before their release by the Syrian regime - September 2012 (AP) Syrian detainees before their release by the Assad regime - September 2012 (AP)
__new_Underarticle_image_EN__
Orient Net
Assad regime’s security services have detained 174 people who returned from the al-Rukban camp to the so-called Internally Displaced Persons (IDP) shelters in Homs, an activist group has reported.
Using networks inside Homs, the Syrian Association for Citizens' Dignity  (SACD) confirmed in a report released in Istanbul on Friday (December 13) that the rumors and reports that have appeared in recent days are true, and that the detained individuals have been transferred to regime’s terrorism courts despite having previously received security clearances from the regime.
The arrests raise urgent protection concerns and questions which need to be answered before any further returns are facilitated to Homs from Rukban, to ensure returns are safe and dignified, as guaranteed under international law, SACS said.
SACD categorized those arrested in two groups:
Defectors and those who fled compulsory military service in the Assad’s military (including reserve forces). This group were handed to Assad’s military police in Al-Qaboun.
__new_in_first_article1__
Youth who never reported for the compulsory military service. They were sent to prisons in Adra and to the Homs Central Prison.
From among the 174 taken from al-byada and Deir Balba, SACD confirmed the following names after receiving permission to share: Mosa al-Shlel, Mostafa al-Daas, Allaa a-Zaal, Fares al0Qas, Khaled a-Kassab, Nadem al-Salama, Ahmad al-Abdullah, Tarek Baejan, Fawaz al-Rakad, Ibrahim al-Kasham, Rakan Abore , Abd aL-Hade al-Hankat, Fawaz al-Shlel, Motlk al-Motlak, Fawaz Abd al-Karem, Hasan al-Najm.
Most of those detained come from Palmyra and the eastern Homs countryside.
It is crucially important to note that all the detained youth and men received guarantees and commitments from the regime and its Russian allies to receive a “personal settlement” which would protect them from persecution and forced recruitment. This process has been taking place in ‘reconciliations’ across Assad-held parts of Syria and returnees from Rukban were forced to check their suitability for this process in the eyes of regime’s security services in advance of leaving the camp.
SACD has repeatedly warned about the dangers facing those forced to return from Rukban under Russian guarantees. SACD issued detailed, documented report about the targeting of Rukban returnees by Assad’s security apparatus.