The Syrian Network for Human Rights (SNHR) states in its report released on Friday (December 13) that the Assad regime is the party most likely to have been responsible for the bombing of an IDP camp and the killing of 11 Syrian children.

The report sheds light on the cluster munitions attack launched by Syrian regime and Iranian militias on the Qah IDP Camp in northern suburbs of Idlib, relies on first-hand accounts that SNHR has collected through speaking directly with witnesses or survivors, none of which are cited from any open sources, and outlines seven accounts, in addition to analyzing a large number of videos and photographs.

As the report reveals, the attack took place on the evening of Wednesday, November 20, 2019, between 19:45 and 20:20, when Assad Regime militias and Iranian militias, which SNHR believes were stationed in Jabal Azan area in the southern suburbs of Aleppo, used a missile platform to fire a Tochka 9M79 missile loaded with 9n24 cluster submunitions that fell on Qahh IDP Camp, resulting in the deaths of 16 civilians, including 11 children and three women and injured at least 50 others, as well as inflicting damage on the Maternity Hospital, and damaging at least 10 of the tents.

The report further reveals that the attack caused the displacement of approximately 80 percent of the already displaced camp residents, who fled due to their fear of the camp being subjected to further attacks. As of the date of publication of this report, SNHR has recorded only a small percentage of these people returning to the camp.

The report outlines the type of ammunitions used in this attack based on a review and analysis of photos of the weapons remnants found at the site, information from witnesses, and the impact of the destruction caused by the attack, noting that Tochka-9M79 tactical ballistic Russian manufactured missiles were used, launched by a 9P129 vehicle.

The report identifies four possible locations which are most likely to have been the location of the missile launcher that launched the missiles, noting that the most likely source for launching these missiles was launcher platforms located in the Jabal Azan area in the southern suburbs of Aleppo according to accounts and witnesses.

As the report explains, these missiles can be equipped with different warheads, including cluster, chemical or nuclear warheads. In the Qahh Camp attack, SNHR was able to verify through witness accounts and the analysis of photos and videos that the missile was equipped with a 9N123K warhead loaded with a total of around fifty 9N24 cluster submunitions.

The report reveals that there have been at least 12 attacks carried out by Assad Regime militias, in which Tochka-series missiles were used, with the missiles being loaded with cluster submunitions in at least three of these cases. 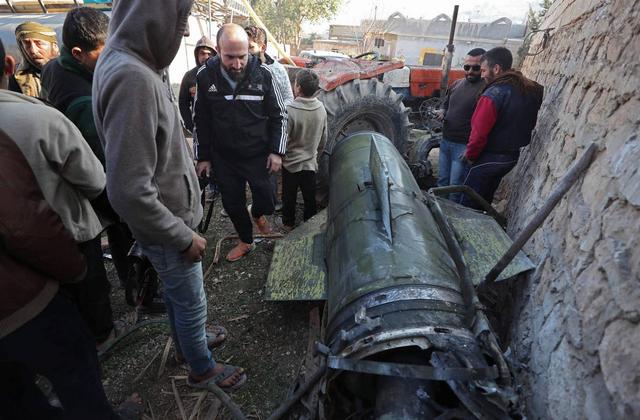 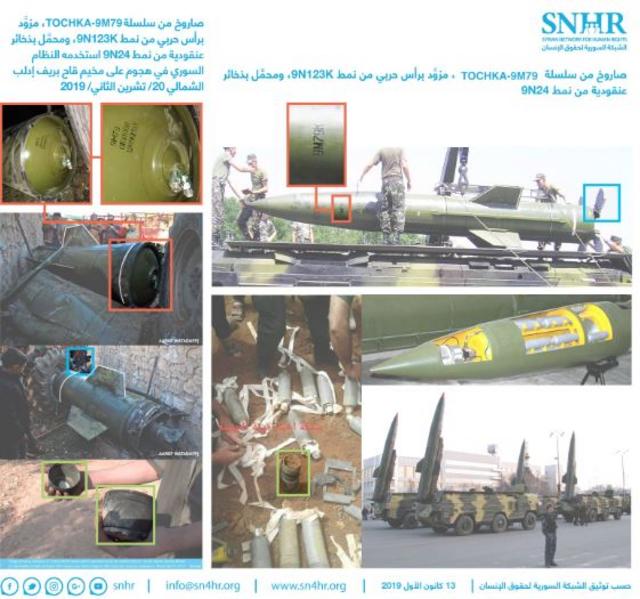 The report notes that the Assad regime’s reconnaissance aircrafts had been flying over the camp for several days prior to the attack, which indicates that the Assad regime is fully aware of the civilian nature of its target and the camps’ occupants; in addition to this, regime militias chose to use cluster munitions to carry out this bombing, meaning that the attack constitutes a compound crime.

The report notes that thousands of the internally displaced people forced to flee by the recent military operation launched by the Assad-Russian alliance forces since April 26, 2019, have been forced to seek refuge in the Atma camps area located in the northern suburbs of Idlib.

As the report reveals, there are now nearly half a million people living in these camps, half of whom are children and women, who live in the most abject living conditions and are deprived of the bare minimum of basic services such as water, bathing facilities, and medical care services; their suffering is exacerbated by a scarcity of humanitarian aid and irregular access of aid providers to the camps. In parallel with this catastrophic humanitarian situation, civilians in these camps live under the continuous threat of death due to the Assad-Russian attacks that followed them to the place of their displacement.

The report additionally calls on the Security Council to take additional steps following its adoption of Resolution 2254, which clearly insists that “all parties immediately cease any attacks against civilians and civilian objects as such,” and stresses the importance of referring the Syrian case to the International Criminal Court, adding that all those who are responsible should be held accountable including the Russian regime whose involvement in war crimes has been repeatedly proven.