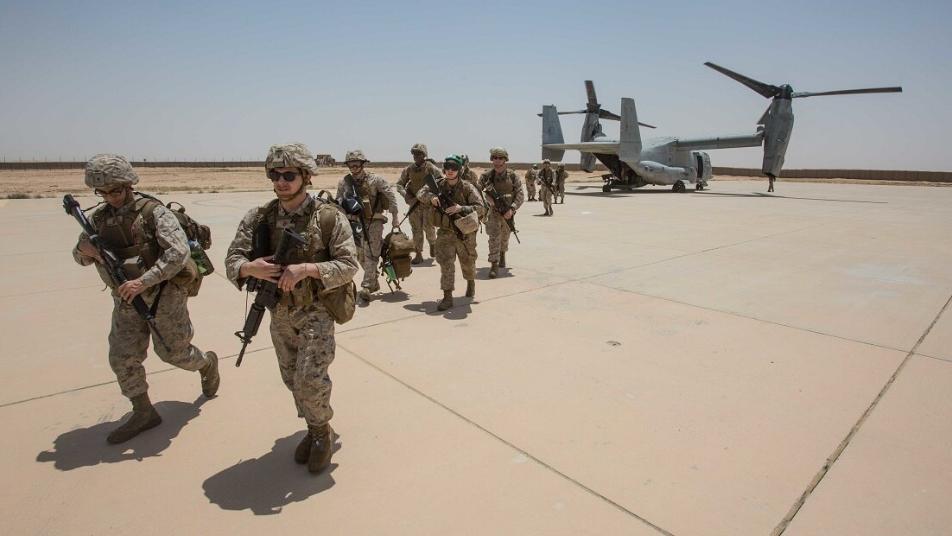 US Marines debark from an MV-22B Osprey at Al Asad Air Base, Iraq, June 4, 2018. (Cpl. Jered T. Stone/Marine Corps)
Orient Net
The US government believes that Iranian regime is behind a series of increasingly sophisticated rocket attacks on joint US-Iraq military facilities in Iraq, several US officials tell CNN. The attacks have taken place as the US has grown increasingly concerned that Iranian regime may be planning new provocations against US troops and interests in the region.
The US military strongly believes Iranian-backed groups inside Iraq are responsible according to a US official with direct knowledge of the recent incidents.
There have been nine rocket attacks on or in the vicinity of Iraqi facilities that host US troops in the last five weeks with the most recent one taking place on Monday.
"We take these incidents seriously as do our Iraqi Security Forces partners, who are investigating these events. We have made clear that attacks on US. and Coalition personnel and facilities will not be tolerated and we retain the right to defend ourselves. US forces operate in Iraq at the invitation of the government of Iraq to support Iraqi forces against ISIS," Pentagon spokesperson Cdr. Sean Robertson told CNN in a statement.
Secretary of Defense Mark Esper said Saturday that "there have been reports in the public space about rockets being fired at American forces on bases in Iraq."
"So we've seen a little bit of an uptick there. And that's, again, another indicator for us of Iran reaching out," he continued, speaking at an event hosted by the Reagan National Defense Forum in California.
In the most recent Monday attack four rockets struck a military training site near Baghdad International Airport where US troops train members of the Iraqi Counter Terrorism Service. While no US personnel were injured or killed, six Iraq security force members were injured according to a statement from the Iraqi military's media office.
Following the attack, Iraqi security forces searched the area and confiscated a pick-up truck near the base carrying a rocket launcher, according to the same statement.
Another attack took place Thursday, with rockets landing near Balad Air Base.
"Iranian-backed militias are now shelling Iraqi bases with American and anti-ISIS Coalition forces on them -- Balad, al-Asad, et cetera," the US State Department's Assistant Secretary for Near Eastern Affairs David Schenker told reporters Friday.
"We're waiting for full evidence," he said while later adding, "If past is prologue, I'd say there's a good chance it was Iran that's behind it."
The types of rockets involved in some of the attacks have become increasingly sophisticated according to one official.
The attack on the airport and a December 3 attack on Al Assad air base both involved 122 mm rockets. Previous attacks used a 107mm variant, which has a shorter range and carries less explosive power than the 122 mm rocket. The 122 mm rocks are more dangerous and can be fired from a greater range and are launched from sophisticated improvised rail systems.
The increasingly sophisticated attacks come amid US accusations that Iran has been moving short-range ballistic missiles into Iraq.
Multiple defense officials have told CNN that the US is weighing deploying 4,000-7,000 additional troops to the Middle East in the face of the increased threat from Iran.
Based on CNN