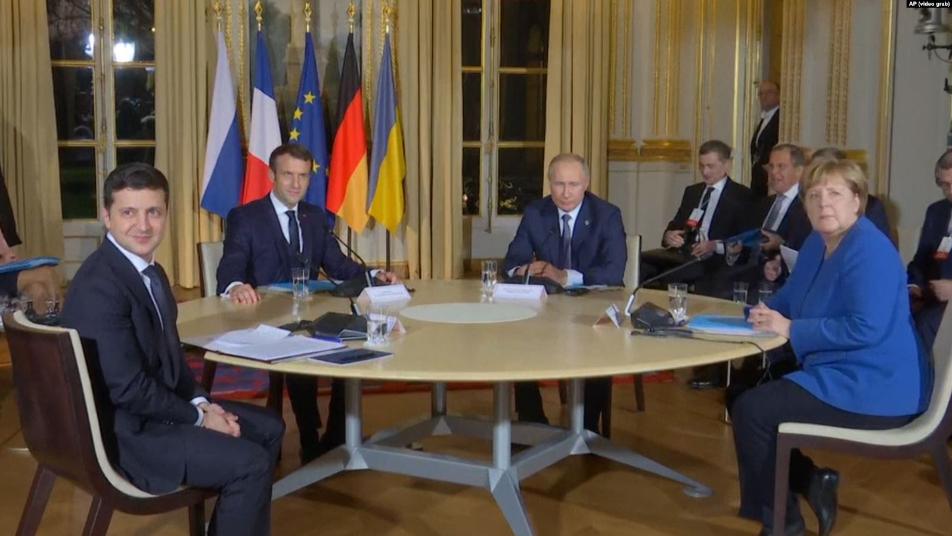 Orient Net
Russian President Vladimir Putin and Ukrainian President Volodymyr Zelenskiy have agreed to "commit to a full and comprehensive implementation" of a cease-fire in eastern Ukraine by the end of 2019, a joint communique says.
Following more than eight hours of talks between the leaders of France, Germany, Ukraine, and Russia in Paris on December 9 designed to revive a road map for achieving peace in the Donbas war between Ukrainian and Kremlin-backed forces, the sides agreed to aim for an "an all-for-all" prisoner exchange by the end of the year.
Zelenskiy told reporters at a news conference after the summit the prisoner exchange would take place on December 24.
Three additional "disengagement areas" will be sought with the "aim of disengaging forces and equipment by the end of March 2020," the document reads.
Before the talks in Paris, Ukrainian and Moscow-backed military forces had earlier withdrawn from three flash points along the front line in eastern Ukraine, where a war is in its sixth year and has killed more than 13,000 people.
"Yes, we can speak of a thaw in relations," Putin said at a news conference after the talks.
Speaking at the same news conference after midnight local time, Zelenskiy said that "it was good to unblock dialogue." He added that the issue of gas transit had also been "unblocked" regarding Ukraine's 10-year contract with Russia that expires at the end of the year.
However, Putin and Zelenskiy, who met for the first time face-to-face, failed to resolve crucial issues such as a timeline for local elections in eastern Ukraine and the borders in the region that Kyiv doesn't control.
Within 30 days, support should be given to have additional "new crossing points" for civilians along the front line, the document reads.
There are currently six civilian crossings points, two in the Luhansk region and four in Donetsk.
Additionally, leaders of the four countries agreed to meet in the same format "within four months" to discuss "political and security conditions" concerning the conduct of local elections in eastern Ukraine.
Still, Zelenskiy said he regretted that very little had been achieved during talks to end the Donbas conflict. "Many questions were tackled, and my counterparts have said it is a very good result for a first meeting. But I will be honest -- it is very little, I wanted to resolve a larger number of problems," he said.
The last time the leaders of France, Germany, Russia, and Ukraine met to discuss the conflict was in October 2016.
Based on RFE