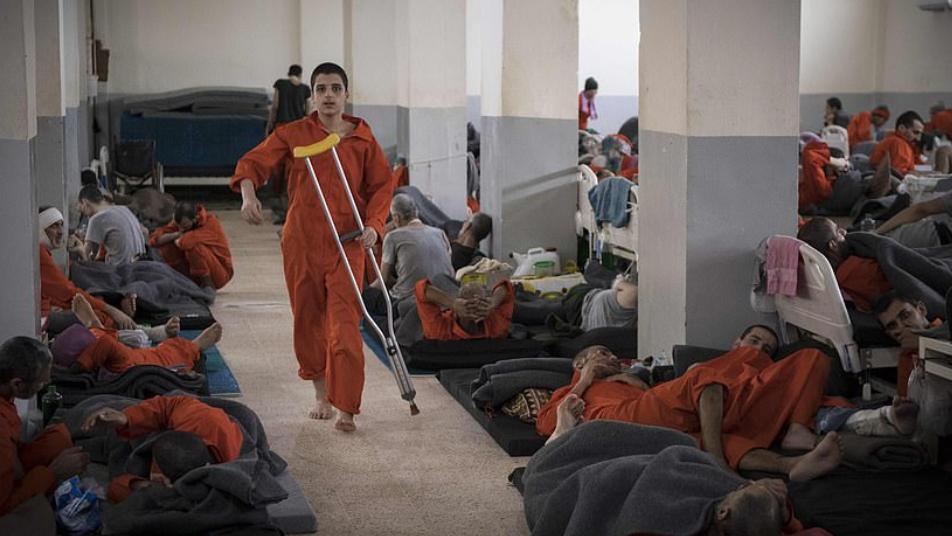 Men suspected of being affiliated with ISIS gather in a prison cell in northeastern Syrian city of Hasakeh on October 26 (AFP File Photo)
Orient Net
Turkey deported 11 French citizens over links to the ISIS group, the Interior Ministry announced on Monday (December 9).
France’s Foreign Ministry declined to comment, but diplomatic sources said the 11 included four women and seven children.
Paris signed an agreement with Turkey five years ago for French nationals arrested by Turkish authorities to be deported in coordination with French authorities. Almost 300 French nationals have been expelled by Turkey since then, according to French officials.
The ministry statement said that 71 foreign ISIS members were sent to their home countries from Nov. 11 to Dec. 9.
They include 18 German, 11 French, two Belgian, two Dutch, one Danish, one Australian, one British, one American, and one Irish nationals.
"No matter what we will send ISIS members back, we are not their hotel," Interior Minister Suleyman Soylu said last month.
The issue of the handling of ISIS members and their families detained in Syria -- including foreign members of the group -- has been controversial, with Turkey arguing foreign-born terrorists should be returned to their countries of origin.
Ankara has said several European countries turned down its efforts to send ISIS members back to their countries.
Turkey has so far deported 7,500 ISIS members, President Recep Tayyip Erdogan said last week, adding that there are currently 1,149 ISIS terrorists in Turkish prisons.
Based on AA, Reuters