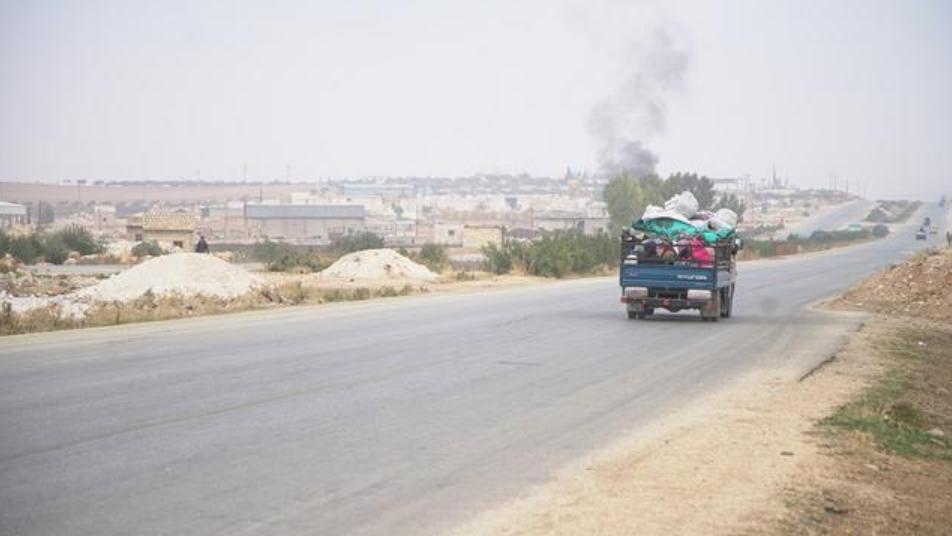 Some 25,000 civilians were displaced in northwestern Syria last week after the attacks of Assad regime and Russia on the Idlib de-escalation zone, according to a Syrian NGO on Saturday (December 7).
Mohammad Halaj, director of Syria’s Response Coordination Group, told Anadolu Agency that thousands of civilians were displaced in the first week of December due to attacks by Assad regime militias, Iranian regime-backed militias and Russia.
Orient correspondent has spotted dozens of vehicles heading from Idlib southern and eastern countryside towards safer areas and towards the camps near the Syrian-Turkish border.
At least 12 civilians, including seven children were killed and others were injured on Saturday after Russian warplanes and Assad helicopters bombed Idlib countryside.  Halaj underscored that the humanitarian crisis in Idlib was getting worse and added: “Around 425,000 civilians are living in the villages and towns of Maarat al-Numan, Saraqib and Ariha. If the attacks target these places with the same violence, the number of displaced will rise more.”
__new_in_first_article1__
He added that the regime militias and Russia also target hospitals, schools, mosques, civilian defense centers and houses to prevent the return of the people.
Most of the displaced people are taking shelter in places neighboring Reyhanli, Turkey’s southern border province of Hatay, as well as areas liberated from terrorists during Turkey’s anti-terror offensives, Operation Euphrates Shield and Operation Olive Branch.
The de-escalation zone is currently home to some four million civilians, including hundreds of thousands displaced in recent years by regime militias from throughout Syria.
Based on AA
قيم هذا المقال 3 0