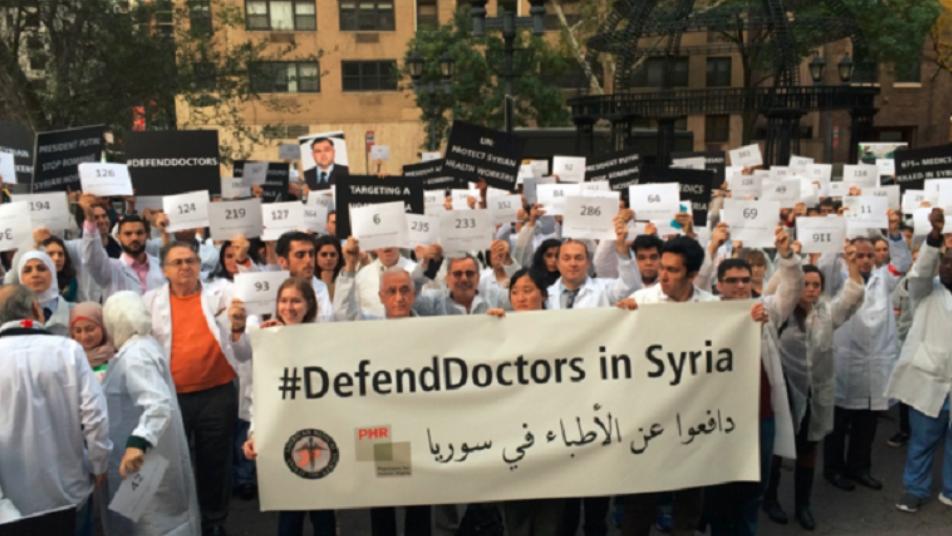 Physicians for Human Rights corroborates claims that Bashar al-Assad’s government has criminalized giving care to its enemies, a violation of international law.
The nearly 9-year-old conflict in Syria has been punctuated by repeated violations of what is considered acceptable in war, including the military’s use of chemical weapons, torture of prisoners and recurrent bombings of hospitals in opposition-held areas. Less attention has been paid to another outcome: the regime’s criminalization of medical care.
On Wednesday, Physicians for Human Rights, a group that has documented the collapse of Syria’s health care system, released a study asserting that over the course of the war, Bashar al-Assad has successfully made medical assistance to his enemies a crime.
Whether it is disinfecting a fighter’s wound or even supplying painkillers to clinics in an insurgent-held neighborhood, such acts are punishable under a counterterrorism law enacted by Assad regime just over a year after the conflict began in March of 2011. A special court has tried tens of thousands under the law, including many medical workers.
This report illustrates how the Assad regime has effectively criminalized the provision of nondiscriminatory care to all, regardless of political affiliation, Physicians for Human Rights said in the study. Health workers who provide care in line with their legal and ethical obligations, it said, are branded as “enemies of the state” in Syria.
The study is based on extensive interviews with 21 formerly detained Syrian health care workers who have fled the country, including seven physicians, four pharmacists, three medical volunteers, one paramedic and one psychiatrist. All said they had endured torture and interrogations while imprisoned and did not want to be identified by name, fearing retribution against their families or against themselves if they ever returned.
A majority of them were arrested, the study said, “because of their status as care providers, and their real or perceived involvement in the provision of health services to opposition members and sympathizers.”
The New York Times interviewed three of them who said they had been detained and interrogated for months. They described cells so cramped that inmates took turns to rest. Two of them — a pharmacist and a surgeon — said they had been arrested at their workplaces.
Most of the former detainees described a similar process of extracting confessions that could be prosecuted under the counterterrorism law, the Physicians for Human Rights study said. “Most had judicial review of their cases by either military field courts, military courts, or counterterrorism court, where due process protections are suspended in practice,” it said.
__new_in_first_article1__
There was no immediate comment by the Syrian authorities to the study. Assad regime has repeatedly defended the counterterrorism law as a necessity for what he contends is his success in retaking and stabilizing most of the country, where by some estimates a half-million people have been killed and roughly half the prewar population of 22 million have fled their homes.
Ibrahim al-Kasem, a Syrian lawyer who used to represent detainees, said that trials in military courts are held in secret, and detainees can be tried in the counterterrorism court without their lawyers. In such settings, he said, “the judges have the ability to do anything.”
Mr. al-Kasem is now the executive director of the Caesar-File Group, established after a Syrian military police photographer code-named “Caesar” released 55,000 images in 2014 believed to show evidence of the systematic torture and death of thousands of detainees.
Rights activists and legal scholars say the counterterrorism law itself is exceedingly vague on what constitutes terrorism so that even peaceful acts could be prosecuted. They say the law also violates a precept of the Geneva Conventions that obliges doctors and other health care professionals to treat the wounded and sick, regardless which side they may support.
“The law is problematic,” said Mai El-Sadany, legal and judicial director at the Tahrir Institute for Middle East Policy, a Washington-based research group. “The reality is that under this law, anyone could be a terrorist.”
When and if the Syria war ends, she said, keeping such a law on the books would present an enormous challenge to rebuilding the country. “How can people begin to return to a state where they suffer the risk of prosecution?” she said. 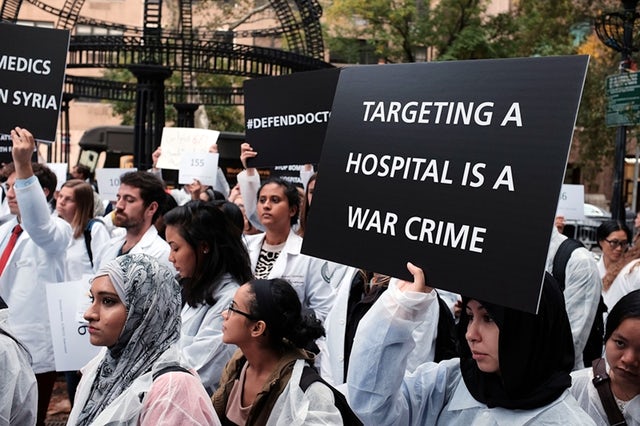 Assad regime was a pioneer in the targeting of health care workers as a battlefield strategy, and has been ignoring criticism of the policy for years. The United Nations Commission of Inquiry, a panel of investigators that has been collecting evidence of human rights violations in Syria, said back in 2013 that government forces had been systematically denying treatment to the sick and wounded in areas controlled by the opposition.
“The denial of medical care as a weapon of war is a distinct and chilling reality of the war in Syria,” the panel said.
__new_in_first_article2__
Michiel Hofman, the senior humanitarian specialist at Doctors Without Borders, a medical charity that operates in insurgent-held areas of northern Syria, traced the targeting of health care workers to the prelude to the war, when peaceful protesters wounded by Assad’s security forces sought treatment at hospitals.
“The authorities said, yes you can treat people but you have to report the patients to the police. Patients didn’t want to be reported to the police, so health care workers created clinics in homes and underground hospitals,” Mr. Hofman said. “The Syrian authorities regarded these hospitals as illegal, right from the start, and a vicious cycle was created early in the conflict.”
Asked about the prospects for rebuilding Syria’s health care system, Mr. Hofman was pessimistic.
“The reason for the persecution of medical workers has not been removed,” he said. “Attacks on health care have become the new normal.”
The vast majority of detainees interviewed by Physicians for Human Rights said they would not go back to Syria under the current conditions, said Rayan Koteiche, one of the study’s authors. “The continuing threat and persecution of professions including medical professionals is a huge barrier to returning,” he said. “To freely practice in accordance with their code of ethics — they don’t see that as possible.”
By Rick Gladstone and Malachy Browne
Carlotta Gall, Jack Ewing and Karam Shoumali contributed reporting.
Edited according to Orient Net
Link to the original source of NYT
قيم هذا المقال 3 0