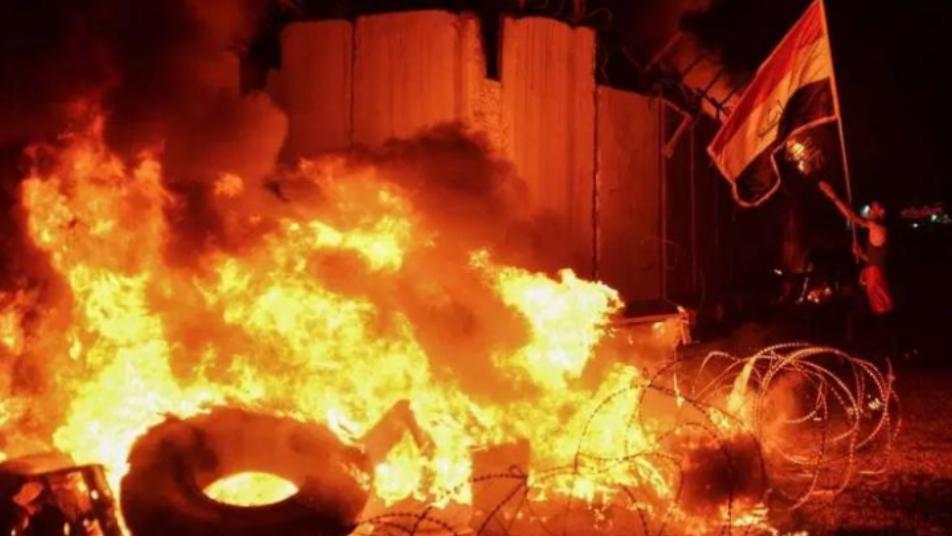 Photo: AFP
Orient Net
Anti-Baghdad government protesters burned an Iranian regime's consulate in southern Iraq for a third time on Tuesday, as the country's political leaders continued talks over selecting a new prime minister following weeks of widespread unrest.
Protesters in the holy city of Najaf burned tires and hurled them toward the main gate of the Iranian consulate, burning it for the third time in the span of a week.
The building was empty at the time of the attack and there were no casualties, according to a police official.
The incident came after hours of a tense standoff with security forces earlier Tuesday when protesters surrounded a key shrine in Najaf. Dozens of demonstrators gathered around the Hakim shrine, demanding that cleric Muqtada al-Sadr help them enter and symbolically take control.
Al-Sadr commands Saraya Salam, a militia group. A few protesters and some elderly tribal sheikhs were eventually permitted to enter the shrine and inspect it.
The protesters believe the shrine is a center for Iranian regime intelligence operations, the police official said.
Officials all requested anonymity in line with regulations.
More than 435 protesters have been killed since October by Baghdad security forces whose prime minister tendered his resignation to the parliament as part of pacification. The government is now a caretaker government.
The report is mainly based on the Daily Sabah