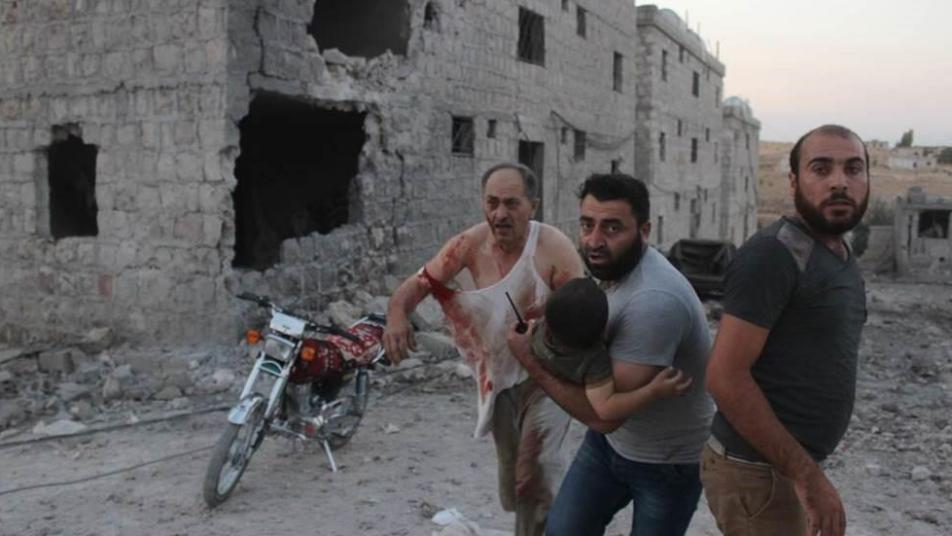 Residents rescue injured child after strike on the displacement center in Hass on August 16, 2019. © MacroMedia Center 2019
Orient Net
The photograph initially seemed no different than millions of others from Syria’s conflict, now in its ninth year: a plume of smoke rising over a town of beige buildings.
But this was said to show something particularly grim: an airstrike on a housing complex for Syrian families already displaced by fighting elsewhere in the country.
The complex was located outside a town called Hass, eight miles from the nearest front line. Residents told us there wasn’t any military presence nearby. It shouldn’t have been a target.
To report this story, The Times’s Visual Investigations team needed to verify that the photo truly showed the strike in question, which had occurred on Aug. 16. So, we looked closer.
The alignment of distant buildings and electricity towers on a ridge matched up with Google Earth images, and they also appeared in drone footage of the complex filmed in early 2019.
This confirmed to us that the picture had been taken in Hass.
Looking even closer, Christiaan Triebert, a reporter on our team, noticed that the housing complex itself could be seen in the photo, shrouded in smoke. A set of windows and a rooftop mast matched the same drone footage of the compound.
Evan Hill, another reporter on our team, tracked down the man who shot the photo, a member of Macro Media Center, a Syrian media outlet, which had sent us the original image file.
Every photo and video contains metadata — file information that tells us the date and time the image was created, information about the make of camera, the focal length and sometimes the GPS coordinates.
Metadata allowed us to confirm the precise minute of the attack — 7:17 p.m. on Aug. 16, just before sundown, as witnesses had told us. So we knew that the photo showed the compound being hit. But why was the exact time important?
Earlier this year, our team obtained thousands of time-coded cockpit recordings of Russian and Assad pilots carrying out bombing missions in Syria. We spent months translating and deciphering their code words, including various Russian phrases to confirm a weapons launch: srabotal (“worked it”), otpravil konfetu (“sent candy”) and dvadtsat odin (“21”).
We’d also obtained a trove of time-coded flight logs, recorded by a network of observers in Syria who document sightings of fighter jets and listen in to radio messages between pilots and ground control.
Knowing the precise minute of the attack on the complex of displaced persons in Hass, we could check the flight logs and the cockpit recordings to establish where Russian and Syrian pilots were flying around that time and what they were doing.
At 7:12 p.m. on Aug. 16, spotters recorded a Russian jet flying near Hass. And just under five minutes later, on the cockpit recordings, a pilot code-named 4-64 confirmed an airstrike, saying, “Sent.” A minute later, plane spotters again recorded a Russian jet overhead.
The evidence clearly points to Russian responsibility for the strike.
The weapon exploded in the courtyard at the heart of the housing complex, bordered on the south by shops and on the east, north and west by housing for the scores of families who lived there. Witnesses told us that at the time of the blast, families had been cooling off from the summer heat in the square before sunset, and children had been playing.
The blast collapsed a row of buildings around the courtyard and caused horrific injuries to nearby victims. The footage filmed by emergency medical workers from the Syrian Civil Defense group, which we also obtained, is too gruesome to describe.
One witness had been on his roof listening to the fighter above when the airstrike occurred. Some of his friends had just returned from a soccer game. They were sitting in the square when they were killed in the explosion.
“There were also innocent women who just wanted to get out of the rooms and get some air outside. They died with their children,” the witness said.
He fled the housing complex with his wife and two daughters after the strike. Many other residents, without the resources to travel, had no choice but to stay.
Nineteen people were killed, including four families. One victim was a pregnant woman.
Throughout Russia’s four-year air campaign in Syria, it has denied its air force’s involvement in some of the bloodiest attacks on civilians. Our evidence reveals the truth.
By Malachy Browne, Christiaan Triebert, Evan Hill and Dmitriy Khavin
Link to the original source of NYT