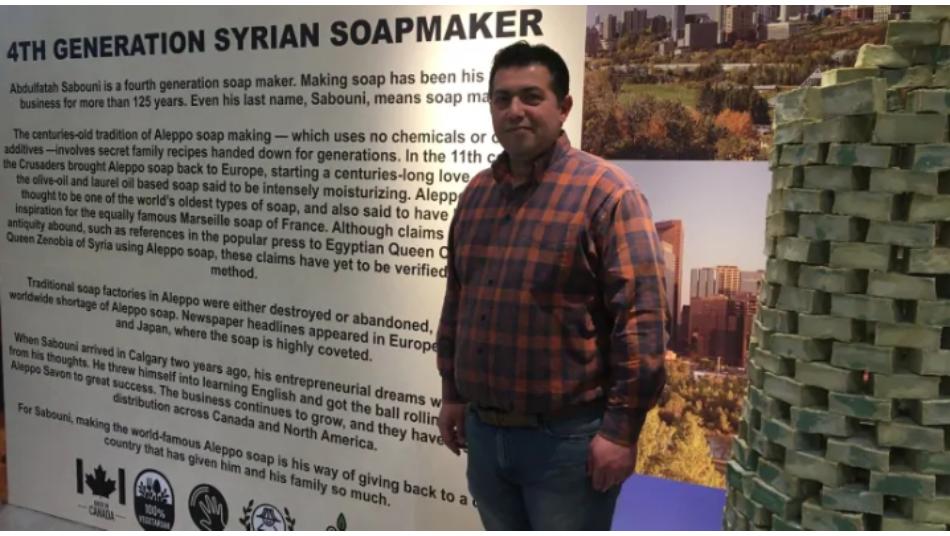 As a fourth-generation soap maker, Abdulfatah Sabouni is bringing his family’s secret soap recipe to Edmonton, opening Aleppo Savon at West Edmonton Mall. (Stephanie Dubois/CBC)
Orient Net
A Syrian refugee who has found success making soap in Calgary is now expanding his business into the largest mall in North America.
Abdulfatah Sabouni is opening his third Aleppo Savon store at West Edmonton Mall on Saturday.
“It’s a big opportunity you know. It’s a big choice, I’m proud to be here,” said Sabouni. “It’s a big feeling.”
Sabouni came to Canada in 2016 after fleeing from war in Syria, bringing with him his four children.
He took classes to learn English and then a year later he set out to carry on with his family business that he was forced to desert back home.
“This was my family job in Syria and Aleppo. My last name is Sabouni which means soap maker and I’m fourth generation."
Sabouni already has two stores in Calgary.
The soap is made from natural ingredients, mainly comprising of olive and laurel berry oil. It takes five to six months to cure until it is ready to be packaged and sold.
Sabouni says demand for the soap has been high, and he is grateful for the response he has received from Canadians.
“When I came here I didn’t think I could continue my work again in Canada,” he said. “I’m so happy to work with Canadian people here.”
“I like this place, I like these people, I start my business and now the success isn’t just for Aleppo Savon, it’s for all Canadians.”
Click here for origin