Orient Net
They should be in school, but like thousands of other children in the war-torn Syrian province of Idlib, brothers Jawad and Yazan are forced to work every day to support their family.
This is no regular job, however. The two boys, aged eight and 15, are gravediggers in one of the deadliest places on earth.
“I help my father when someone comes needing to bury someone, so we dig the grave with him then we fill it with earth, clean it and everything. We water the trees and flowers and everything that dad asks us to do,” says Jawad, the youngest of the two.
“I am not afraid of working here because they are dead, may God have mercy on their souls and our souls too,” he adds, in an interview conducted by Save the Children.
The boys work with their father Ghassan in the graveyard, on the outskirts of Idlib. More than 500 people have been killed over the last two months in a Russian and Assad regime-led assault on the last opposition-held province including 130 children.
Airstrikes have emptied towns and villages in the province. Many schools have been damaged by fighting or are being used as shelters. Those that remain open and functional can only accommodate up to 300,000 of the 650,000 school-age children, according to the charity.
The family are among more than a million people displaced from other parts of the country to Idlib. Ghassan and his family are originally from Aleppo province. They fled before the regime’s offensive to capture the city, during which their house was destroyed. Now they live in rented accommodation.
Despite their young ages, the boys have already witnessed so much. The family lived under ISIS rule for a short time, a period that still haunts the boys.
“During the war we started to see bodies hanging at [public] squares, some with their heads chopped off. [There was] another woman who was killed by stoning, and a man who was thrown off the building. This is how life has become, disaster,” says Yazan.
“The hardest thing is seeing the bodies on the ground, the faces of the innocent, dead people, to see a man chopped up to pieces, carried away in sacks. This is the hardest thing we witnessed,” he adds.
The work is difficult and dull. They earn a little money from people who visit the graves, but it is hardly enough.
“I don’t play with anything here. I just sit with my father, and if someone comes to the graves, I fill water for him and help. If no one came or if they don’t give us money, we ask if they would give us a tip, if they did not [tip us], how would we live?” 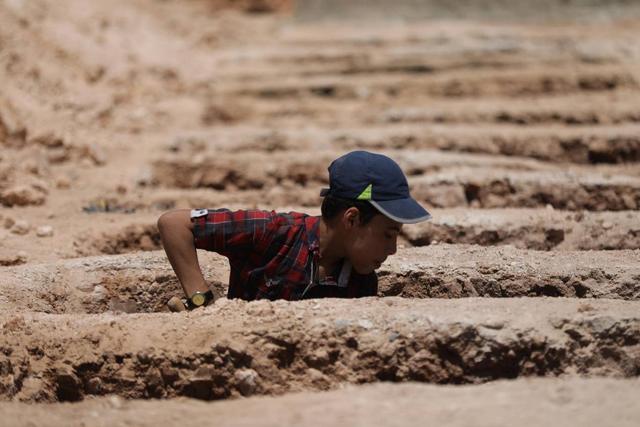 Ghassan would like to send his sons to school, but he has six children to look after. He cannot afford the clothes and supplies they need.
“Our situation cannot allow for schools or the like,” he says. “If today he wants the money for a notebook, I’d say to him that I don’t have it. Where could I get money from? There are younger siblings who need to eat and drink, water.”
“It is a shame for them to work in this sun, they come with me from 6am till 7-8pm. The poor children, they did nothing wrong.”
By Richard Hall Middle East correspondent
Link to the original source of INDEPENDENT