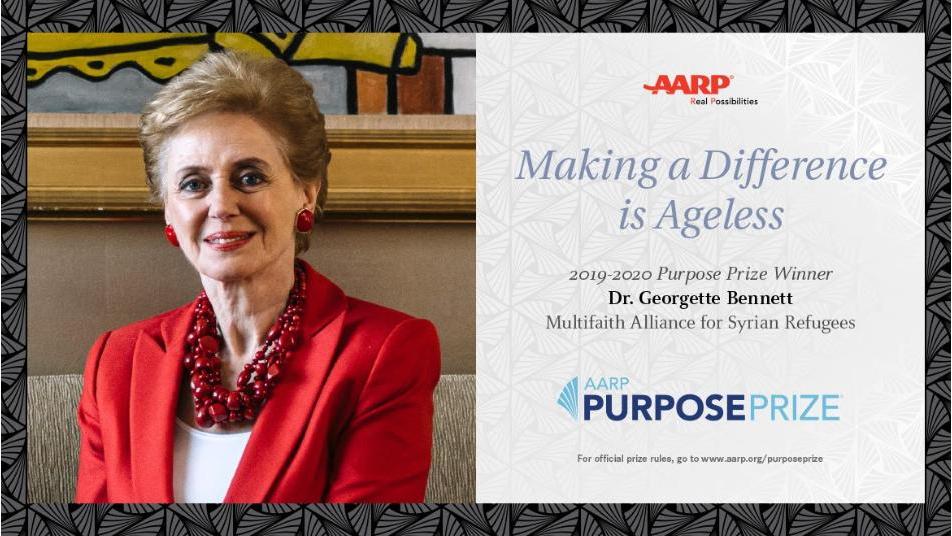 The Multifaith Alliance for Syrian Refugees (MFA), which has delivered over $130 million worth of humanitarian aid to internally displaced people (IDPs) in Syria has announced that its founder, Dr. Georgette Bennett, was awarded AARP’s prestigious Purpose Prize.
The prize was awarded in recognition of Dr. Bennett’s tireless efforts to bring together over 100 organizations representing a host of different faiths for a common purpose – getting food, medicine, and other essentials into the hands of the millions of Syrians displaced by the ongoing Syrian war.
“I am humbled to receive the Purpose Prize,” said Dr. Bennett. “The innocent victims of the war in Syria urgently need the world’s help. I hope that the Purpose Prize, and AARP’s vast network will bring renewed attention to the Syrian people, who make up nearly one quarter of the world’s displaced population.”
__new_in_first_article1__
Along with the other Purpose Prize awardees, Dr. Bennett will be honored at an awards gala in Washington, D.C. on November 12, 2019. It will be emceed by journalist and CBS contributor María Elena Salinas and commentator David Brooks, author of the bestselling The Second Mountain.
Bennett Gross, Executive Director of MFA agreed with Dr. Bennett: “The AARP Purpose Prize is a well-deserved honor for Georgette. Moreover, its additional value will be to focus millions on the desperate needs of the people of Syria. Right now, women throughout Syria lack access to basic feminine and maternal healthcare. Hundreds of thousands of children face starvation.”
The Multifaith Alliance for Syrian Refugees (MFA), a project of the Tides Center, is comprised of 100 faith based and secular participating organizations. MFA’s mission is to mobilize the interfaith response to the humanitarian crisis, raise funds to alleviate suffering, cultivate groundbreaking partnerships to advance future stability in the region, send relief to address the desperate humanitarian crisis, advocate for sensible and humane refugee policies, and create awareness of the facts, the needs, and the opportunities for positive action.
قيم هذا المقال 0 0