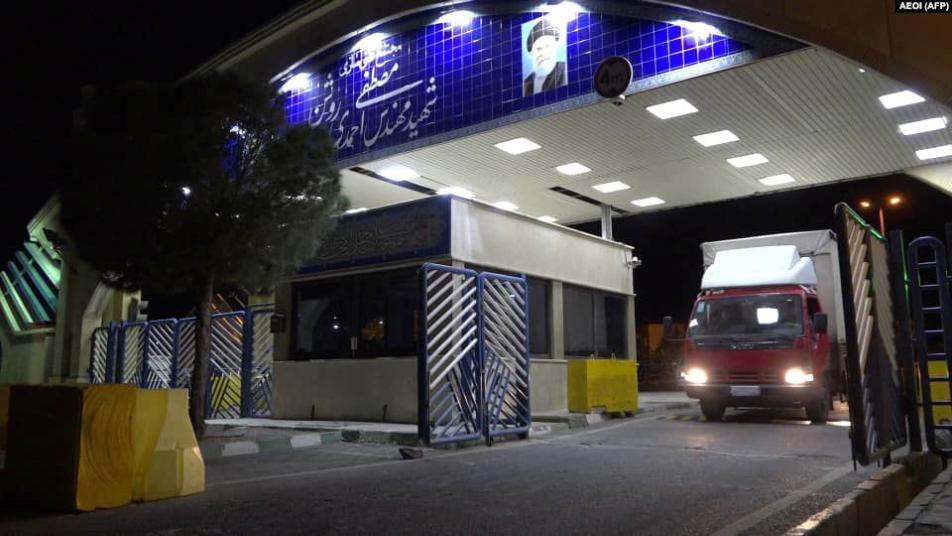 A photo reportedly shows a truck carrying nuclear fuel leaving the Natanz nuclear power plant in the central Iranian province of Isfahan to the underground Fordow facility on November 6.
Orient Net
US Secretary of State Mike Pompeo is canceling one of four sanctions waivers that allowed foreign firms to cooperate with Iran's civilian nuclear program without penalties.
The waivers are some of the last remaining provisions of a landmark 2015 nuclear agreement between Iran and world powers that the administration of US President Donald Trump withdrew from last year. Under the 2015 deal, Tehran pledged to curb its nuclear activities in exchange for international sanctions relief.
Pompeo told a news conference on Monday (November 18) that the waiver for Iran's Fordow site will be eliminated in mid-December. Iran has recently stepped up uranium enrichment at the facility.
"President Rohani recently announced that Iran will begin uranium enrichment activities at the Fordow facility," Pompeo said.
"Therefore, the United States will terminate the sanctions waiver related to the nuclear facility at Fordow effective December 15, 2019."
Last week, the International Atomic Energy Agency (IAEA) confirmed in a report that Iranian regime had far surpassed its allowed stocks of enriched uranium.
The waivers for Fordow as well as the Bushehr nuclear power station, the Arak heavy water plant, and the Tehran Research Reactor were last extended late last month.
Meanwhile, the IAEA said on November 18 Tehran was ignoring yet another limit that was meant to rein in its nuclear program under the deal.
Based on RFE and AP