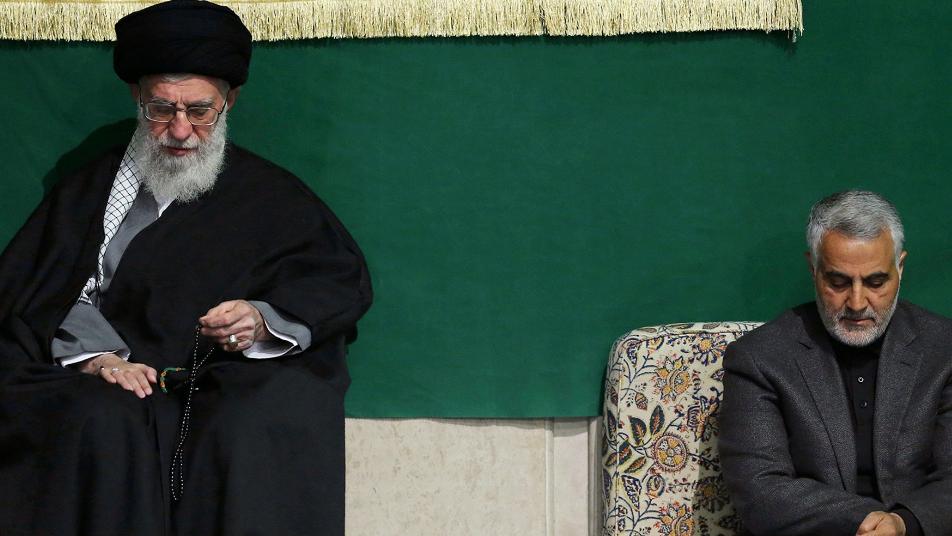 In this photo Maj. Gen. Qassim Suleimani, right, sits next to Ayatollah Ali Khamenei at a ceremony in a mosque in Tehran on March 27, 2015. Photo: AP Photo
Orient Net
The New York Times and The Intercept say they have reviewed hundreds of pages of purported Iranian intelligence documents that detail Iranian regime’s massive influence in neighboring Iraq.
They say the unprecedented leak of 700 pages of Iranian intelligence cables shows Tehran’s efforts to embed itself in Iraq, including paying Iraqi agents working for the United States to switch sides.
Vanessa Gezari of The Intercept says her publication received the documents from an unknown source and that “we still don’t know who they’re from.” The Intercept shared the documents with the Times.
Monday’s article about the documents comes amid growing anti-Iran sentiment expressed by Iraqi anti-government protesters. It also comes at a time of widespread anti-government protests in Iran.
The report said the ministers of municipalities, communications, and human rights “are in complete harmony and at one with us and are our people.” The environment minister, it said, “works with us, although he is Sunni.” The transportation minister — Bayan Jabr, who had led the Iraqi Interior Ministry at a time when hundreds of prisoners were tortured to death with electric drills or summarily shot by Shia death squads — was deemed to be “very close” to Iran. When it came to Iraq’s education minister, the report says, “we will have no problem with him.”
Against this chaotic backdrop, Jabr, then the transportation minister, welcomed Suleimani, the Quds Force commander, to his office. Suleimani had come to ask a favor: Iran needed access to Iraqi airspace to fly planeloads of weapons and other supplies to support the Assad regime of Bashar al-Assad in its fight against Syrian opposition forces.
It was a request that placed Jabr at the center of the longstanding rivalry between the United States and Iranian regime. Obama administration officials had been lobbying hard to get the Iraqis to stop Iranian flights through their airspace, but face to face with the Quds chief, Iraq’s transportation minister found it impossible to refuse.
Suleimani, Jabr recalled, “came to me and requested that we permit Iranian airplanes to use Iraqi air space to pass on to Syria,” according to one of the cables. The transportation minister did not hesitate, and Suleimani appeared to be pleased. “I put my hands on my eyes and said, ‘On my eyes! As you wish!’” Jabr told the intelligence ministry officer. “Then he got up and approached me and kissed my forehead.”
Jabr confirmed the meeting with Suleimani, but claimed the flights from Iran to Syria carried humanitarian supplies and religious pilgrims traveling to Syria to visit holy sites, not weapons and military supplies to aid Assad as American officials believed.
One report from the Jabouri adviser revealed that the United States was interested in gaining access to a rich natural gas field in Akkas, near Iraq’s border with Syria. The source explained that the Americans might eventually try to export the natural gas to Europe, a major market for Russian natural gas. Intrigued, the intelligence ministry officer, in a cable to Tehran, wrote, “It is recommended that the aforementioned information be used in exchange with the Russians and Syria.” The cable was written just as Russia was significantly stepping up its involvement in Syria, and as Iran continued its military buildup there, in support of Assad.
Based on The Intercept, AP