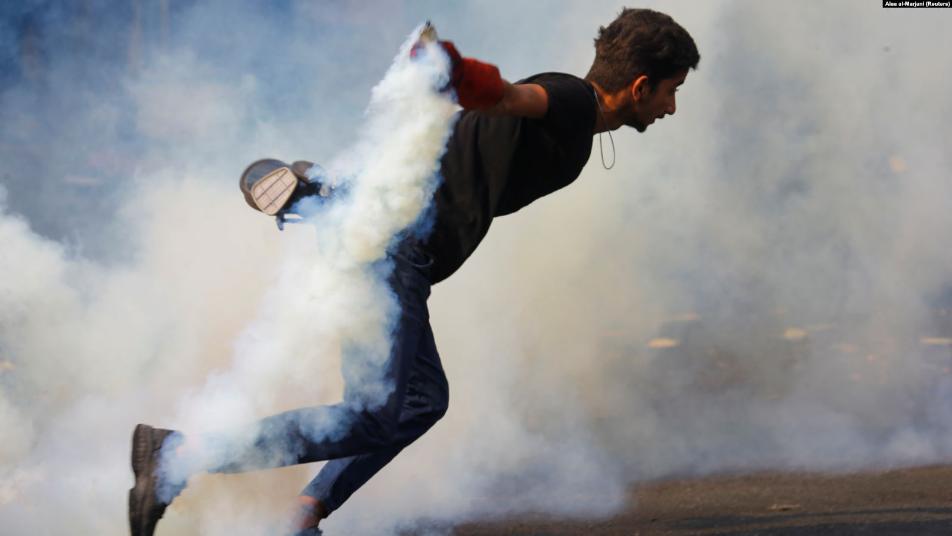 An Iraqi demonstrator runs as he carries a tear-gas canister during ongoing anti-government protests in Baghdad on November 14.
Orient Net
Protesters have once again blocked the entrance to Iraq’s Umm Qasr commodities port near Basra, preventing employees and tankers from entering and bringing operations down by 50%, two port sources told Reuters on Monday (November 18).
If the blockage goes on until the afternoon, operations will come to a complete halt, the sources said. The port was previously blocked from Oct. 29 to Nov. 9 with a brief resumption of operations between Nov. 7-9.
Umm Qasr is Iraq’s main Gulf port. It receives imports of grain, vegetable oils and sugar shipments that feed a country largely dependent on imported food.
The blockage cost the country more than $6 billion during just the first week of the closure, a government spokesman said at the time.
On Sunday, Iraqi protesters regained control of a third bridge leading to Baghdad’s Green Zone.
Security forces used on Sunday tear gas and stun bombs to prevent protesters from getting right across Ahrar Bridge in central Baghdad, part of a weeks-long attempt to disrupt traffic and reach the Green Zone housing government ministry and embassies.
More than 300 people have been killed since the start of mass unrest in Baghdad and southern Iraq in early October, the largest demonstrations since 2003.
Protesters are demanding the overthrow of a political class seen as corrupt and beholden to foreign interests. They have turned to civil disobedience tactics like strikes, disrupting traffic, and blocking ports or oil facilities.