Russian warplanes were behind airstrikes that killed 44 Syrians, including 8 children, investigation shows 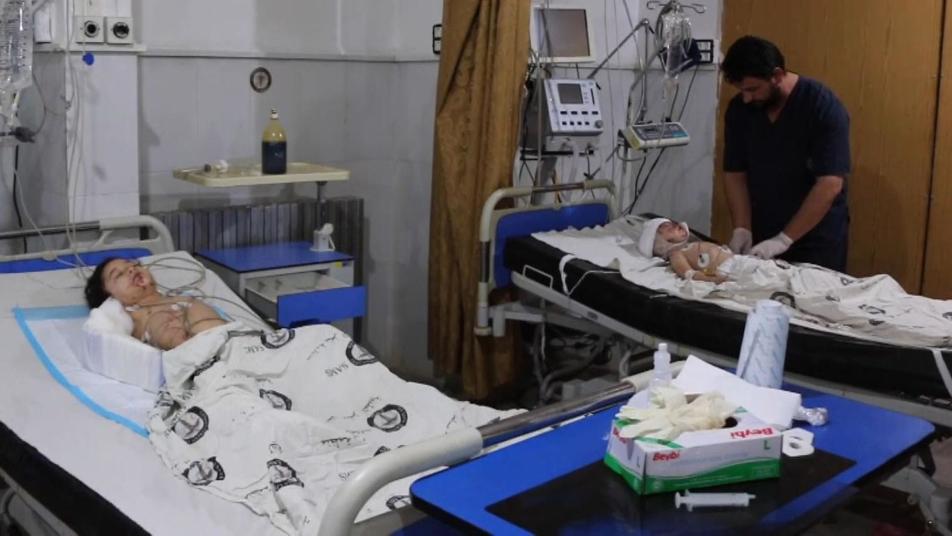 Batul and Ahmed were taken to a hospital in Turkey
Orient Net
First-hand testimony gathered by Sky News suggests Russian warplanes were behind airstrikes which killed 44 in a Syrian district filled with schools.
The findings challenge Russian accounts of the four blasts in Ma'arat Al-Numan on 22 July, with military chiefs insisting their fighter jets were not in the area at the time.
However, spotters say they logged plane departures from a Russian base in Assad's stronghold of Latakia which match the timings of the bombings.
Maps produced by Russian generals to denounce the claims focus on an area 300 metres away from a market hit twice in the strikes.
Experts believe the Russian air force is the only power in this area with the capability to carry out these strikes.
Sky News has presented its findings to the Russian Ministry of Defence but has not received a response yet.
The four-month Sky News investigation involved making several trips inside the warzone to gather evidence from eyewitnesses and survivors, as well as documenting video evidence, audio testimony and scrutinising the scene of the strikes first-hand.
Sky News also spoke to underground observers who use radio transmitters to intercept fighter pilot communications, allowing spotters to warn residents of impending airstrikes.
Others spot drones in the area used by the Assad regime and Russian allies to track the movements of residents and opposition fighters.
The four bombings on Ma'arat Al-Numan in one day were the worst in recent times in Idlib province, the last opposition area in Syria. Eight of the 44 people who died were children, and more than 70 were injured.
The airstrikes started early in the morning while many of the victims were still asleep. The initial strike was at 8.35am in an area known as the school district because of the high concentration of schools and training centres in the area.
Although it was summer break, a number of them were running holiday courses with children about to arrive for the day's lessons. According to witnesses, the bomb was so devastating it shattered windows and homes in many of the surrounding streets. 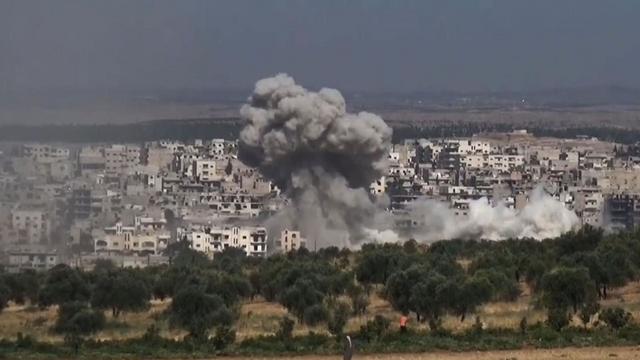 Camera and mobile phone footage shows first-aiders hurrying to the scene with the atmosphere clouded with dust and strewn with debris.
Residents stumbled out of their homes and into the roads covered in dust, having just woken but already struggling to take out their injured. Eight minutes later another bomb hit almost the same spot.
The moment of impact is captured on a mobile phone by one of the residents.
Successive airstrikes on a single location are known in Syria as a "double tap". This had the most devastating effect on life and limb in Ma'arat Al-Numan that day.
Within minutes of the first blast, the market area was crowded with first responders from the Syrian Civil Defence, known as the White Helmets.
There was also a large number of residents in the streets - all trying to help the wounded from the initial attack. Many of them were among the worst hurt or killed when the second bomb landed.
Young workers in a falafel shop where many residents ate breakfast had been scrambling to leave when the second strike happened.
Those who had been catching an early morning tea at a bakery, only to drop everything to help the wounded, now found themselves terribly injured and many others killed.
A motorbike repair shop which had been in full operation was obliterated, and all the workers were killed.
A medic with the White Helmets who had just arrived at the scene had run into a shop to take cover. The ceiling collapsed on him, killing him outright, and injuring two other volunteers.
All six families living in the three-storey apartment block above the market stalls were wiped out.
The entire building pancaked in the blast. There was so much devastation that most rescue workers believed at first that no-one inside the apartments could have survived.
Rania Kisar, a Syrian-American teacher who was in Ma'arat al Numan running a charity school, told us of the horrific scene as she rushed to check her institute. The students were due to arrive when the successive strikes hit, causing a shrapnel rainstorm.
"I went along the street and the first thing I saw was a leg," she told us. "There were body parts everywhere."
"There were little metallic pieces like screwdrivers just coming out of the sky," she added. "I can't even describe what they were like, all metallic pieces, sharp and edgy, like tiny screwdrivers and it was falling on us like rain."
The footage she filmed on her phone documents much of what happened that morning in horrific detail. She can be heard sobbing throughout much of it as she repeatedly comes across dismembered limbs.
At one point, another resident, also clearly in shock, is waving a dismembered leg at her while screaming.
She rushes into a building with a crowd of others as they hear another aircraft, which they fear is preparing to drop another bomb.
"We were all praying," she said. "We thought we were going to be killed."
Barely 11 minutes later, at 8.54am, there was a third strike which hit northeast of the market area where the twin bombings struck.
It is little over a kilometre away, near a mosque and a hospital where the White Helmets tried to take casualties for treatment.
At 9am, a fourth airstrike landed near a cultural centre.
The bulk of the dead and injured were in the "double tap" bombings near the market. It was six hours before they pulled out a survivor there.
She was seven-year-old Batul, her hair caked in blood but pigtails still intact.
Obada Zikra, the White Helmets volunteer who worked to pull her free, told Sky News he heard her crying.
He said: "We spoke to her, tried to reassure her we are coming. 'We are very close,' we kept saying but she was crying a lot, calling for water."
Batul told the White Helmets her baby brother, three-year-old Ahmed, was near to her under the rubble and it seemed like a miracle when the volunteers managed to pull him out alive too.
Both their parents and all their siblings were killed in the blasts. 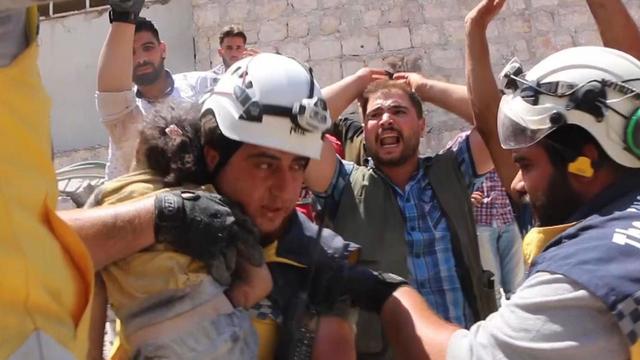 "If this isn't a war crime, I don't know what is," one survivor of the airstrikes told Sky News.
We have monitored the progress of the two children since that day. Both were taken out of the warzone and across the border to Turkey through a complicated series of arrangements because of the lack of legal documentation and the deaths of all their immediate relatives.
They had to spend weeks in hospital because of the severity of their wounds.
Batul, seven, had several operations and needs further surgery after suffering severe internal injuries.
Ahmed had operations on his eye but both of them are recovering well and now being cared for by elderly relatives.
Their futures are still far from certain with no guarantees about how long they will be allowed to remain in Turkey.
Weeks later when we went back to Ma'arat Al-Numan with the man who pulled both of them free, the White Helmets volunteer showed us the huge crater where the children's home used to be.
They had been sleeping with their family on the second floor but because their bedroom was near the corner of the apartment, they somehow survived.
It was exhilarating for the White Helmets who worked for more than 12 hours straight that day trying to save lives.
Realising the children were alive made their dangerous work worthwhile, Obada Zikra told us. 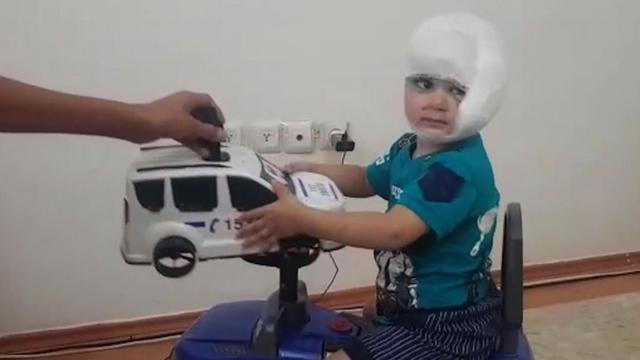 But their efforts come at a high price and he spoke of the lasting trauma many of the volunteers are still enduring.
Mr Zikra said: "At the beginning it was very difficult, at night we all have nightmares. I sometimes see myself trapped in the rubble or I dream about aircraft targeting us."
Hadi Abdullah, a freelance filmmaker who had been living in Ma'arat Al-Numan for months before the bombings, told us the area was a fully residential one.
He insists there were no military camps in the city; no fighters; no armed personnel at all. It is a view backed up by other residents.
The city is considered critical of both the Assad regime and the different militia groups operating in Idlib province.
For this reason, they've resisted any fighting group setting up bases in the city. And now they want justice.
Hadi Abdullah told us: 'Although the Russians denied responsibility for this massacre, we're positive they did this and it is a war crime." 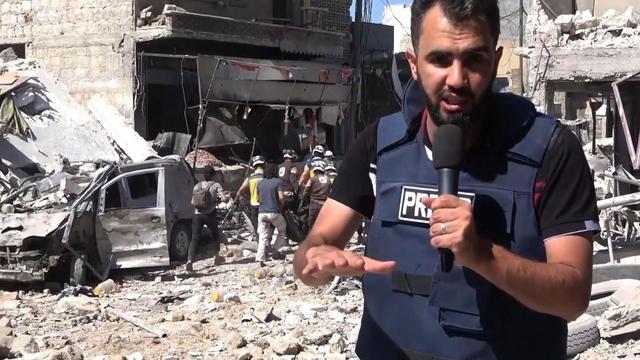 He is not alone in that view. Doctors and residents also insist the repeated bombings of homes, civilian places and health facilities is a systematic tactic by the Russians and the Syrian regime to force the population to move out of the area.
A hospital we went to in Idlib at the end of August had been struck by multiple bombs just a few days earlier.
The wards were still full of medical equipment, medicines, oxygen bottles and other hospital paraphernalia. This is the hospital the children might have expected to have been treated in, had it not been situated in a warzone filled with groups flouting international laws.
Hospitals in Idlib are now seriously dangerous places to be because they are repeatedly targeted and attacked. We collected and examined a lot of the hospital paperwork and documents which were still strewn around.
Among the evidence we collected was a folder listing the patients due for blood analysis that day.
It showed a number of patients listed as receiving treatment on the day of the bombing. We found no reason to doubt this was a fully functioning hospital.
Russian and Assad regime supporters often claim the hospitals are used to harbour weapons and fighters, therefore making them viable targets.
Targeting health facilities is listed as a war crime, as well as a crime against humanity by the United Nations.
The GPS co-ordinates of all health facilities still operating in Idlib have been supplied to the UN (of which Russia is a member) to be disseminated to the fighting groups in Syria to ensure protection.
But doctors working in Idlib insist this is being constantly disregarded.
Dr Samir Qaddour told us: "We share our hospitals and public centres (locations) with the UN so they know where there are hospitals here."
He went on: "But this is continuously ignored and no one follows up these war crimes. No-one cares about what is happening here."
By Alex Crawford
Link to the original source of Sky news