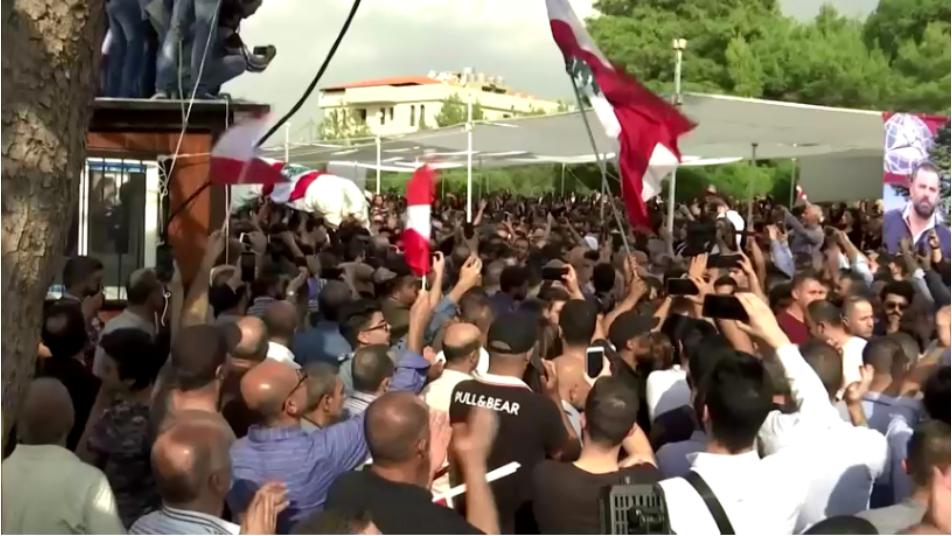 Orient Net
The funeral for Alaa Abou Fakher, the protester shot dead after an altercation with Lebanese soldiers at a roadblock south of Beirut on Tuesday (November 12), was held on Thursday (November 14).
Large numbers of mourners gathered around his coffin supporting his children and wife, Lara, who said he was shot in front of his 12-year-old son to protect her.
"He died in my arms, his blood dried on my arms, on his son's arms who is 12-year-old, this is a scene he will never forget in his life," she said during the funeral.
The shooting in Khaldeh, south of Beirut, was the first of its kind in nearly four weeks of nationwide protests against Lebanon's ruling elite, escalating tensions in a country mired in deep political and economic crisis.
Lebanon's Defence Minister said on Thursday the country was in a "very dangerous situation" and compared street unrest of recent days to the start of 1975-90 civil war, while President Michel Aoun said on his official Twitter account that he hoped a government could be formed in the coming days aiming to meet the demand of the protesters.
One month after the start of nationwide protests, Lebanon is in serious political and economic trouble with no indication of its leaders agreeing on a new government to replace the outgoing cabinet of Saad al-Hariri, who quit as premier on October 29.