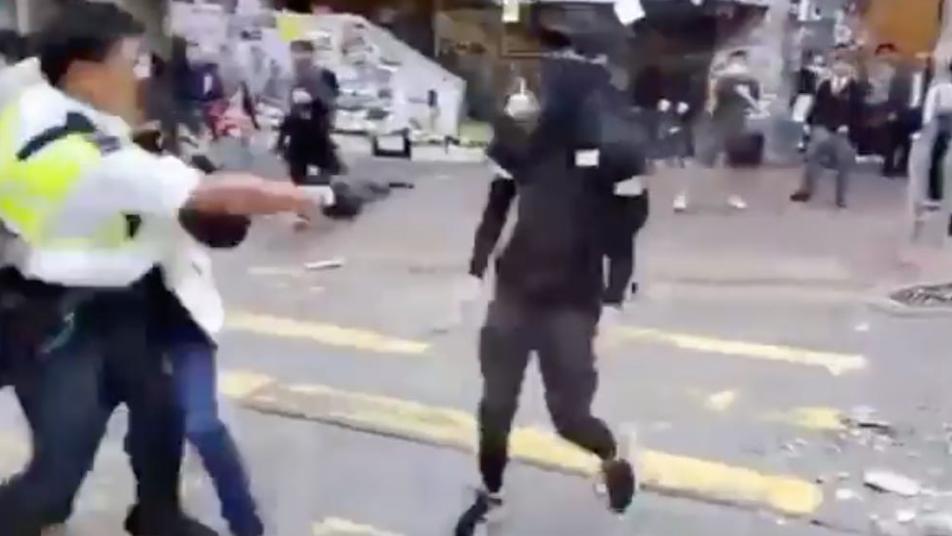 Orient Net
Hong Kong police shot and wounded one protester who, hospital officials said, was in critical condition on Monday (November 11), as the Chinese-ruled territory spiraled into rare working-hours violence in its 24th straight week of pro-democracy unrest.
Police fired live rounds at close range at protesters in Sai Wan Ho on the eastern side of Hong Kong island and said one protester was wounded.
Video footage showed a man lying in a pool of blood with his eyes wide open. Police also threw a woman to the debris-littered street and pepper-sprayed her in the face as plastic crates were thrown at officers.
Protesters built barricades under the hot autumn sun and set fires in the street.
Anson Yip, a 36-year-old Sai Wan Ho resident, said protesters were throwing rubbish to create a road block when police ran to the scene.
“They didn’t fight and the police ran and directly shot. There was three sounds, like ‘pam, pam, pam’,” Yip said.
“They (the protesters) are against the government, that’s why the police just shot them.”
Police later fired tear gas in the same area. Protesters and residents formed a barricade of polystyrene boxes around the bloodstain beside a pedestrian crossing after police forensic teams left the scene.
“When I arrived the road was blocked and people were yelling at the police, calling them murderers,” said a 24-year-old man, one of several office workers gathered there, who gave only his surname, Wing.
Video images circulating online showed a man squirting petrol on another and setting him on fire, apparently outside Ma On Shan Plaza in the New Territories. Though engulfed in flames, the man was able to rip off his shirt and douse the blaze.
Reuters was unable to immediately verify the footage.
Without confirming the video, the Hospital Authority said a man had been admitted with severe burns and was in critical condition, as was another, a 21-year-old, suspected to have been wounded in Sai Wan Ho, who was undergoing an operation.
Police said in a statement radical protester had set up barricades across the city and warned demonstrators to “stop their illegal acts immediately”.
The unrest also spread to Mong Kok, one of the most densely populated areas on earth, on the Kowloon peninsula and often the site of street clashes.
Police did not immediately comment on the shooting. They first began using live rounds as warning shots in August and have shot an 18-year-old protester and a 14-year-old, both of whom survived.
Based on Reuters