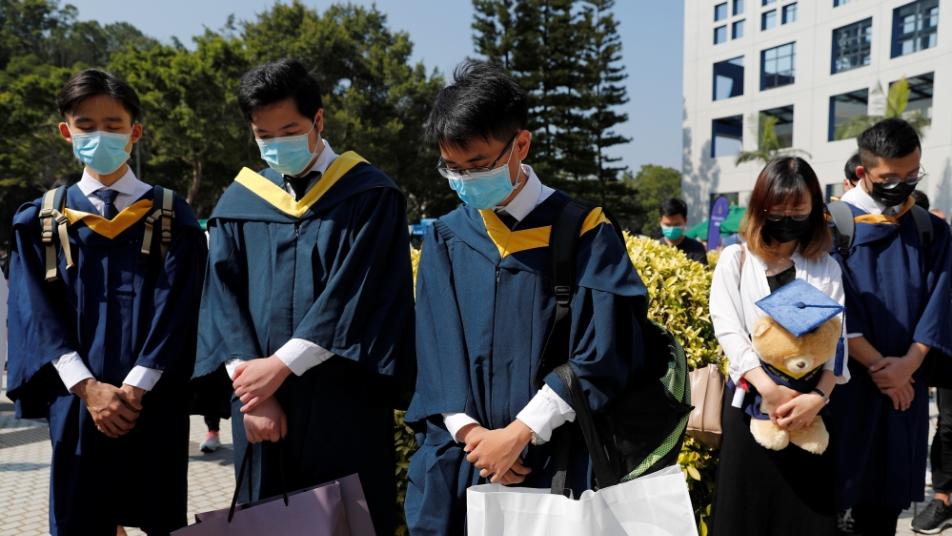 Students attend a ceremony to pay tribute to Chow Tsz-lok, 22, a university student who fell during protests at the weekend and died early on Friday morning [Tyrone Siu/Reuters]
Orient Net
A student at a Hong Kong university who fell one floor in a parking lot during pro-democracy protests at the weekend died on Friday (November 8), the first student death in months of demonstrations in the Chinese-ruled city and a likely trigger for fresh unrest.
Chow Tsz-lok, 22, an undergraduate at the University of Science and Technology (UST), died of injuries he suffered in the early hours of Monday, when he fell from the third to the second floor of a parking lot during a police dispersal operation.
Chow’s death, on graduation day for many students, is expected to fuel anger at police, who are already under pressure amid accusations of excessive force as the city grapples with its worst political crisis in decades.
UST students trashed a campus branch of Starbucks, part of a franchise perceived to be pro-Beijing, and rallies are expected across the territory in the evening, when violence traditionally picks up.
“Condemn police brutality,” they wrote on the restaurant’s glass wall.
Demonstrators had thronged the hospital this week to pray for Chow, leaving flowers and hundreds of get-well messages on walls. Students also staged rallies at universities across the former British colony.
“He was a nice person. He was sporty. He liked playing netball and basketball,” friend and fellow UST student Ben, 25, told Reuters in tears. “We played netball together for a year. I hope he can rest in peace. I really miss him.”
Students and young people have been at the forefront of the hundreds of thousands who have taken to the streets since June to press for greater democracy, among other demands, and rally against perceived Chinese meddling in the Asian financial hub.
Last weekend, anti-government protesters crowded a shopping mall in running clashes with police that saw a man slash people with a knife and bite off part of the ear of a local politician.
Based on Reuters