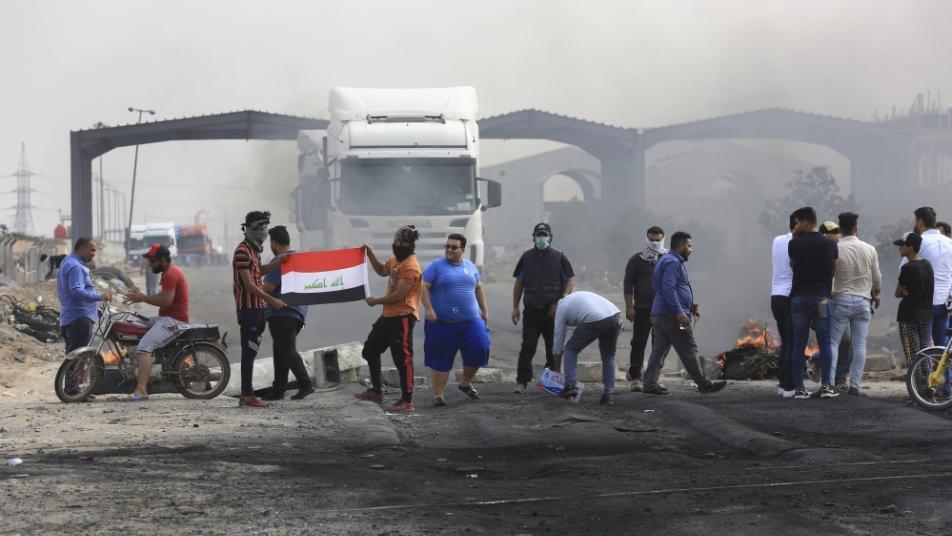 Anti-government protesters block the port of Umm Qasr in Iraq on Thursday [Nabil al-Jourani/AP]
Orient Net
Iraqi security forces shot dead at least six anti-government protesters in Baghdad on Thursday and killed four others as they broke up a sit-in in the southern city of Basra, police and medical sources said.
Scores more were wounded in the clashes as weeks of deadly violence in Iraq over protests against an entrenched political elite showed no signs of abating.
Security forces used live fire against protesters near Shuhada Bridge in central Baghdad. Gunfire was used against demonstrators in Basra, the main source of Iraq’s oil wealth, who had staged a days-long sit-in.
Elsewhere in southern Iraq, dozens of protesters burned tyres and blocked the entrance to the port of Umm Qasr, preventing lorries from transporting food imports, just hours after operations had resumed, port officials said.
The Iraqi government has failed to find a way out of the biggest and most complicated challenge it has faced in years.
A crackdown by authorities against mostly unarmed protesters has killed more than 260 people since demonstrations began on Oct. 1 over lack of jobs, chronic power and clean water shortages, poor education and healthcare and corruption.
Based on Reuters