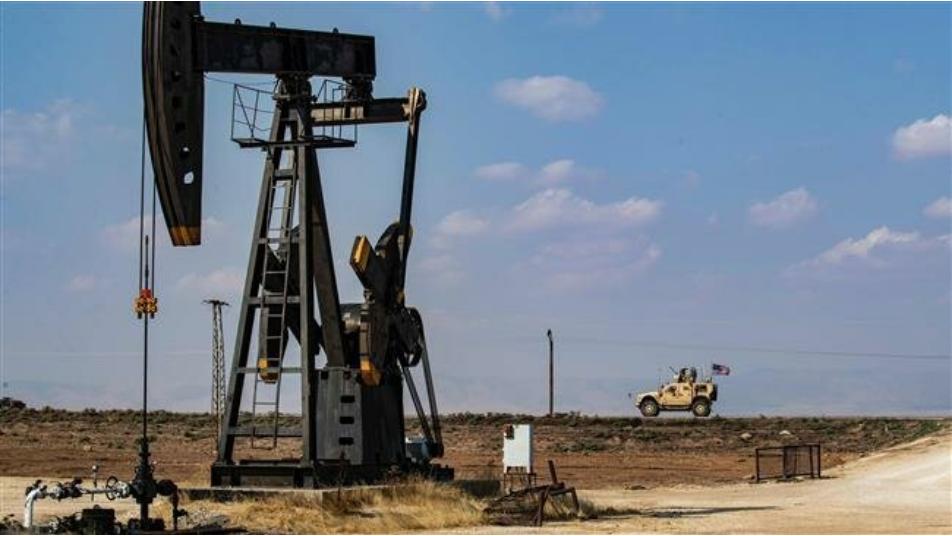 A US military vehicle, part of a convoy arriving from northern Iraq, drives past an oil pump jack in the countryside of Qamishli, Hasakah Province, Syria, October 26, 2019. (Photo by AFP)
Orient Net
The United States will repel any attempt to take Syria’s oil fields away from US-backed Syrian militia with “overwhelming force,” whether the opponent is ISIS or even forces backed by Russia or Assad regime, the Pentagon said on Monday (October 28).
The US military announced last week it was reinforcing its position in Syria with additional assets, including mechanized forces, to prevent oilfields from being taken over by remnants of the ISIS militant group or others.
Deir ez-Zoor 24 posted a video showing a convoy of US troops while entering Deir ez-Zoor, carrying military equipment.

#Exclusive
Video shows a convoy of US troops while entering #DeirEzzor, along with logistical support and military equipment..#D24 pic.twitter.com/RfyESMQOHl

US Defense Secretary Mark Esper offered some of his most detailed remarks to date about the mission at a news briefing on Monday.
“US troops will remain positioned in this strategic area to deny ISIS access those vital resources. And we will respond with overwhelming military force against any group that threatens the safety of our forces there,” Esper told reporters at the Pentagon.
Pressed on whether the US military mission included denying any Russian or Assad regime militias access to the oilfields, Esper said: “The short answer is, yes, it presently does.”
He noted that the US-backed Syrian Democratic Forces, or SDF, relied on that oil income to fund its fighters, including the ones guarding prisons that hold captured ISIS fighters.
“We want to make sure that SDF does have access to resources in order to guard the prisons, in order to arm their own troops, in order to assist us with the defeat-ISIS mission,” he said.
“So that’s our mission, is to secure the oilfields.”
President Donald Trump said last week a small number of US troops would remain in the area of Syria “where they have the oil,” a reference to oilfields in the Kurdish-controlled region.
Based on Reuters