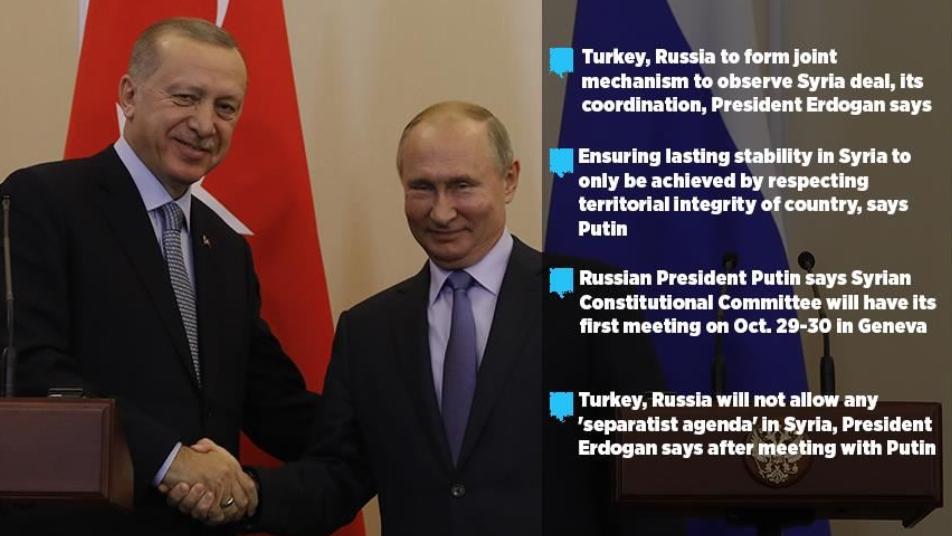 Syria Memorandum of Understanding between Turkey & Russia reached in Sochi - Text
__new_Underarticle_image_EN__
Orient Net
Turkey and the Russian Federation has reached a Memorandum of Understanding in Sochi on Tuesday (Oct. 22), the memorandum included:
President of the Republic of Turkey, Recep Tayyip Erdoğan and President of the Russian Federation, Vladimir Putin agreed on the following points:
1. The two sides reiterate their commitment to the preservation of the political unity and territorial integrity of Syria and the protection of national security of Turkey.
2. They emphasize their determination to combat terrorism in all forms and manifestations and to disrupt separatist agendas in the Syrian territory.
3. In this framework, the established status quo in the current Operation Peace Spring area covering Tel Abyad and Ras Al Ayn with a depth of 32 km will be preserved.
4. Both sides reaffirm the importance of the Adana Agreement. The Russian Federation will facilitate the implementation of the Adana Agreement in the current circumstances.
__new_in_first_article1__
5. Starting 12.00 noon of October 23, 2019, Russian military police and Syrian border guards will enter the Syrian side of the Turkish-Syrian border, outside the area of Operation Peace Spring, to facilitate the removal of YPG elements and their weapons to the depth of 30 km from the Turkish-Syrian border, which should be finalized in 150 hours. At that moment, joint Russian-Turkish patrols will start in the west and the east of the area of Operation Peace Spring with a depth of 10 km, except Qamishli city.
6. All YPG elements and their weapons will be removed from Manbij and Tal Rifat.
7. Both sides will take necessary measures to prevent infiltrations of terrorist elements.
8. Joint efforts will be launched to facilitate the return of refugees in a safe and voluntary manner.
9. A joint monitoring and verification mechanism will be established to oversee and coordinate the implementation of this memorandum.
10. The two sides will continue to work to find a lasting political solution to the Syrian conflict within Astana Mechanism and will support the activity of the Constitutional Committee.