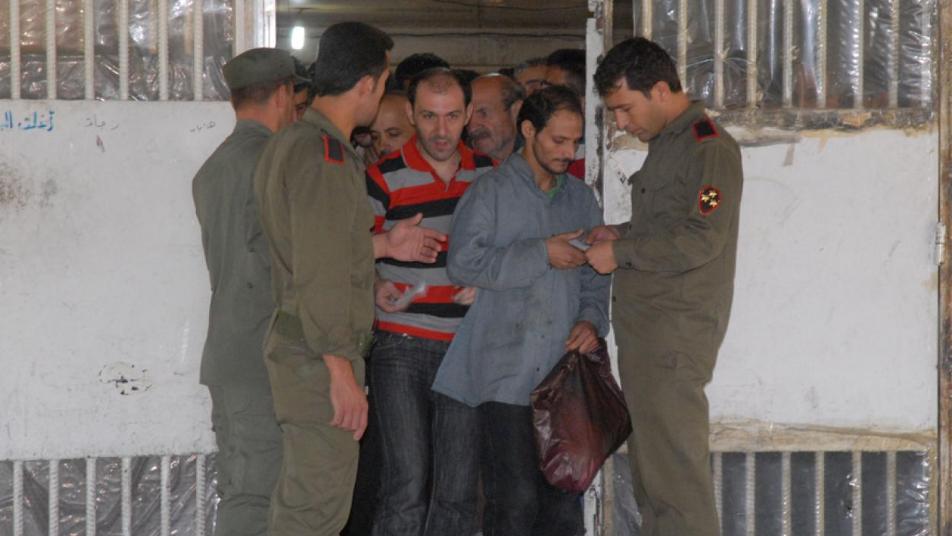 Inmates of Damascus Central Prison are released on 11 June 2014. The families of some prisoners are forced to pay huge bribes in order to secure their release (AFP)
__new_Underarticle_image_EN__
Orient Net
Assad appears to have learnt nothing from the conflict and the desire of most of the returnees to abandon Syria again, other than to employ maximum repression against the population
In Europe and across the Middle East, politicians are increasingly urging Syrians displaced by the eight-year conflict to head back home, now that the war is winding down. Bashar Assad, backed by Russia and Iranian regime, has won, they claim, and like him or not he has brought stability to the country.
But a meticulously assembled report issued this week documents the violence and terror that colour the lives of Syrians under the Assad regime. His circle appears to have learnt nothing from the conflict, and the desire of most of the returnees to abandon Syria again, other than to employ maximum repression against the population.
The report, prepared by the Syrian Association for Citizens’ Dignity and based on interviews with 165 returnees in Homs, the Damascus countryside, Daraa and Aleppo, paints a dire picture of life for those Syrians who return to the country. The report also underscores the failure of the international community to address the core problem of the Syrian conflict: the continued existence and nature of the dictatorial Assad regime.
“It is not safe for displaced Syrians to return to Assad-held areas,” the 44-page report’s executive summary concludes. “Returnees and most people living in regime-held areas live in fear and feel extremely vulnerable and unsafe.”
It describes continuing “widespread and systematic human rights violations” by unformed security forces, Iranian-backed militias and foreign groups. “Arbitrary arrests, forced recruitment, extortion and the absence of basic services are the main factors driving this fear and the returnees’ desire to leave their homes again, this time permanently.”
“Returnees overwhelmingly asserted that they regret their decision to return, regardless of the hardship they faced in displacement,” says the report. It states that 63 per cent of returnees interviewed are actively seeking to flee Syria again.
__new_in_first_article1__
The problems go beyond violence and human rights abuses. The regime is rotten to its core. Interviewees alleged that they were shaken down by officials and security forces for bribes – for everything from obtaining official documents to transporting harvested fruits and vegetables to marketplaces. With no industry and a collapsed economy, many returnees are unemployed, and unable to sustain their lives while paying off regime enforcers.
“There is always the fear of extortion or detention because my children are away and because of the malice of the security forces,” one 62-year-old from Homs says.
“I have been arrested and blackmailed several times, and there have been several robberies in the neighbourhood,” another man from Homs tells the researchers. “Everyone knows the thieves but cannot do anything.”
Of those who want to leave, 31 per cent want to head to Europe and another 31 per cent said they intended to reach Turkey.
But the miserable conditions of Syrians inside the country may prevent many voluntary returns. Some 84 per cent of returnees and residents living in areas under Assad’s control say they don’t advise members of the diaspora to return home.
In conversations with friends and relatives abroad, they “describe a vicious circle of fear of arrest, enforced disappearance, inadequate basic living requirements, monopolies enforced by regime-backed traders, pervasive corruption, and the absence of the rule of law.”
One 27-year-old from Daraa told the researchers: “Return? Where to? To the injustice, to detention, to be drafted in [military] reserves or in compulsory service, or into the security forces?”
__new_in_first_article2__
Despite the precariousness of life as a refugee in a foreign country, fewer and fewer Syrians want to their native land, even if the civil war ends.
The Assad regime ignited the largest refugee crisis in recent history by launching a war against its own people that has displaced around half the country’s population of 25 million.
The regime now looks set to win the conflict, regaining huge swaths of the country that it had lost over the years. The report urges leaders to think of new ways to protect the rights of displaced Syrians returning home, perhaps enshrining their rights in the constitution that is being drafted.
“The international community must increase and adapt their efforts to protect Syria’s displaced from refoulement or increased pressure to return until the conditions for their voluntary, safe and dignified return are guaranteed,” says the report.
As long as Assad and his cruel, corrupt enforcers remain in power, who could blame Syrians living abroad for not wanting to return?
By Borzou Daragahi
Edited according to Orient Net
Link to the original source of the Independent