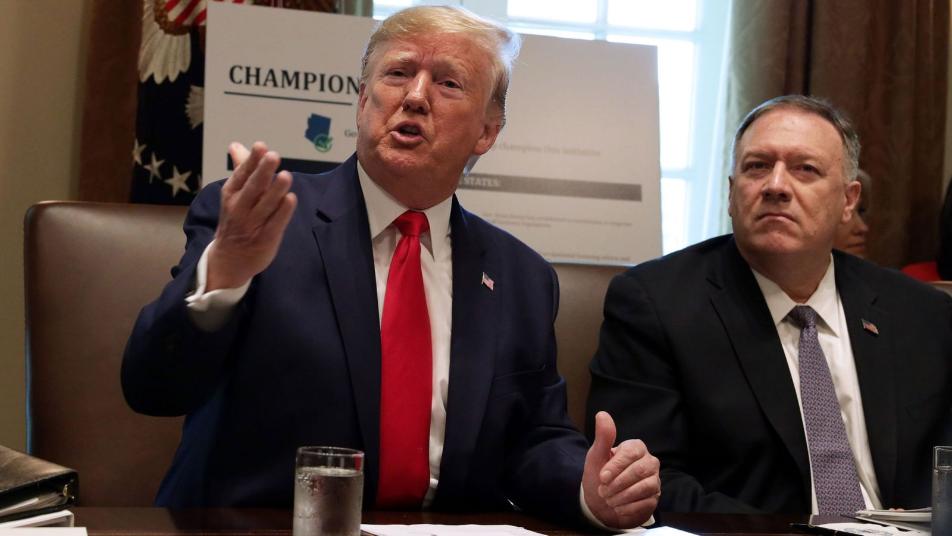 Orient Net
US President Donald Trump on Monday (October 21) said he did not want to leave any American troops in Syria, but that US forces leaving the country now would deploy elsewhere before eventually returning to the United States.
Trump, speaking at a meeting of his Cabinet at the White House, also said it appeared a five-day pause negotiated last week in the Turkish offensive against US-allied Kurdish-led fighters in northern Syria was holding despite some skirmishes, and that it could possibly go beyond Tuesday’s expiration.
“I’m sure if we needed a little extension that would be happening,” he told reporters at the meeting.
Turkey began its cross-border operation following Trump’s decision two weeks ago to withdraw US troops from the area. US officials said then that those troops were expected to be repositioned in the region. Some of them could go to Iraq.
A small number of US troops would stay “in a little different section to secure the oil,” as well as in “a totally different section of Syria near Jordan and close to Israel,” Trump said on Monday.
“That’s a totally different mindset,” Trump said, adding: “Other than that, there’s no reason” for US troops to remain. “They’re going to be sent initially to different parts,” he added. “Ultimately, we’re bringing them home.”
The American withdrawal has been criticized by US lawmakers, including some of Trump’s fellow Republicans, as a betrayal of Kurdish allies who for years have helped the United States fight ISIS.
On Monday, US Defense Secretary Mark Esper said the Pentagon was considering keeping some US troops near oilfields in northeastern Syria alongside Kurdish-led Syrian Democratic Forces (SDF) to help deny oil to ISIS.
Trump defended the withdrawal decision saying, “we never agreed to protect the Kurds for the rest of their lives.”
“We helped the Kurds. And we never gave the Kurds a commitment that we’d stay for the next 400 years and protect them,” he added.
Trump also said he was fulfilling a campaign promise to disengage from international conflicts as part of his “America first” agenda as he seeks re-election next year.
“I want to bring our soldiers back home,” he said. “I have to do what I got elected on, and I have to do what I think is right.”
Based on Reuters