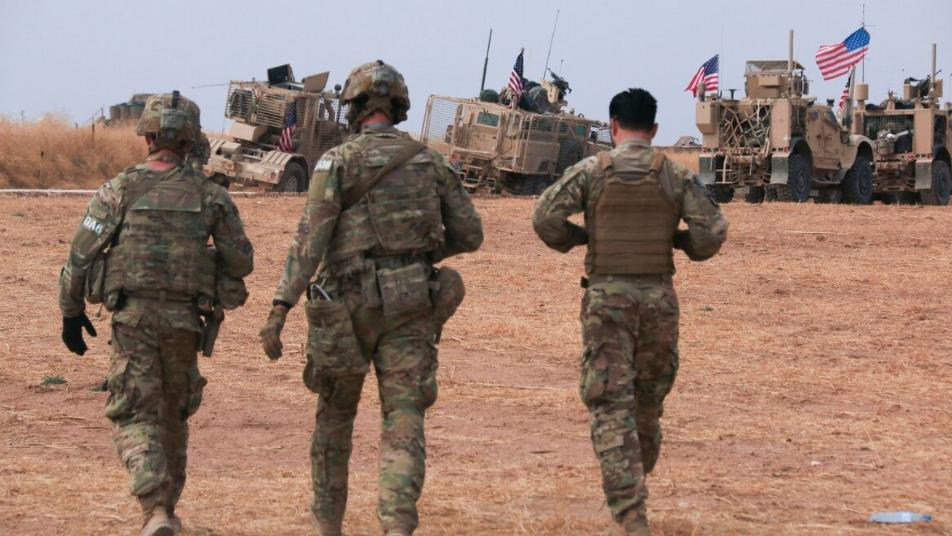 An American military convoy stops near the town of Tel Tamr, north Syria, Sunday, Oct. 20, 2019. (Baderkhan Ahmad/AP)
Orient Net
It is the conceit of the commentariat that Iranian regime is a winner of the latest mayhem in the Middle East—the departure of US troops from Syria and the subsequent Turkish incursion. Yet the clerical oligarchs seem anxious about all that is happening around them.
A continuing Syrian war was working for Tehran. It had managed to navigate skillfully the politics at play, developing good relations with both Bashar Assad and the Kurdish militias opposing him. The latter’s US support created a sort of balance between the sides. Despite his precarious situation, Assad dreams of unifying Syria. His Iranian patrons have long advised him to limit his ambitions and consolidate power in the territory he commands. With the US backing the Kurds, Assad had to follow Iran’s advice or risk a wider war he could ill afford.
Now that the US is gone and the militias have been forced to ally with Assad, little stops him from trying to seize the 40% of the country he doesn’t control. After nearly a decade of war, Syria is exhausted. Any attempt to control more land is bound to jeopardize Assad’s existing gains. If Assad is mired in a longer and costlier war, Tehran would have to commit even greater resources to this conflict at a time when its economy is suffering due to sanctions and mismanagement.
Turkey looms large in the clerical imagination. In a region littered with weak and failing states, Turkey is a formidable power with its own ambitions for the Middle East. Iranian regime is already at loggerheads with Saudi Arabia and caught in a costly sectarian conflict across the region. Ankara’s intervention in Syria is bound to complicate Iran’s designs in the Levant. Iran had forged decent ties with Kurdish forces and it viewed its buffer zone in northern Syria as a useful check on Turkey. With the US gone, the Kurds have been swept back before the Turkish advance.
Iranian regime’s leaders including President Hassan Rouhani and Foreign Minister Javad Zarif urged Turkey not to move in to Syria. Ayatollah Ahmad Khatami, the hard-line Friday prayer leader, captured the essence of Iran’s concerns, warning Turkey “not to stumble into America’s trap”. In a nonverbal warning, Iran conducted military maneuvers along its border with Turkey shortly before Ankara invaded Syria, according to Reuters.
With the US gone, Iran’s attempts at persuasion will do little to restrain Turkey. In Syria, Ankara is bound to be more powerful, Assad more reckless, the Kurds substantially weakened, and ISIS reconstituted. None of this is good news for Iran, which hoped to make incremental gains in the Levant by keeping the Syrian conflict simmering at a low burn.
And the current flare-up comes at a bad time for Tehran. In one of the many paradoxes of the Middle East, Iran gained much from the US toppling Saddam Hussein. Iraq’s Sunni strongmen have haunted Persian monarchs and mullahs for decades, even launching an invasion in 1980 that traumatized a generation of Iranians. Since the 2003 invasion, Iran-backed Shiite militias have operated as an auxiliary force, coming to dominate Iraq—one of the Islamic Republic’s most consequential successes. Iran uses Iraq to transport its oil to the global markets in defiance of American sanctions.
But Iran’s domination doesn’t go over well. Tehran is the key actor in selecting Iraq’s prime ministers and Parliaments. This means it gets the blame for the Iraqi government’s corruption and inefficiency. Iraqi resentment of Iran exploded into protests this month that shook the foundations of the Baghdad government.
Tehran has tried to smooth things over. Iranians repeat the conspiracy theory that the US instigated Iraqi protests. Supreme Leader Ali Khamenei warned that “Iran and Iraq are two nations whose hearts and souls are tied together. . . . Enemies seek to sow discord, but they’ve failed, and their conspiracy won’t be effective.” Mr. Khamenei’s putative successor, Ayatollah Ebrahim Raisi, reinforced his narrative, stressing that sedition is taking hold of Iraq. Beneath the stale rhetoric, the mullahs likely realize that the Iraqi government’s hold on power is tenuous. If it collapses, there could follow another messy war whose outcome Tehran may not be able to condition.
On top of all of that, now Syria is in flames. There are many sound arguments about why the US should not have withdrawn its modest presence. But the notion that the pullout empowers Tehran is belied by its leaders’ expressions of anxiety. The Middle East rarely offers a respite to ambitious nations, even Iran.
By Ray Takeyh
Edited according to Orient Net
Link to the original source of WSJ