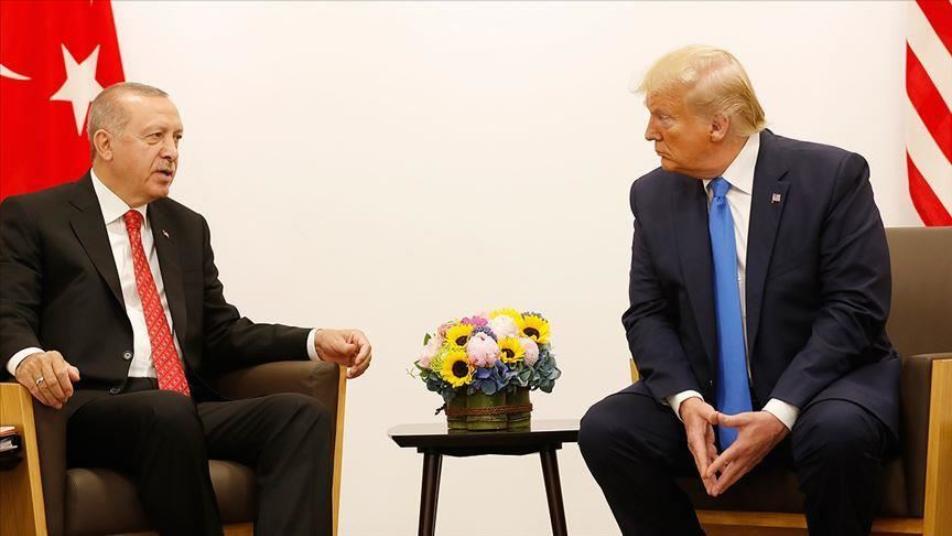 Orient Net
Turkish President Recep Tayyip, US counterpart Donald Trump speak over phone
Turkish President Recep Tayyip Erdogan and his US counterpart Donald Trump spoke over phone on Friday (October 18) and discussed the safe zone to be established east of the Euphrates River in northern Syria.
“I hope Turkey-US joint efforts will continue for peace, prosperity and stability of our region,” Erdogan said in a Twitter post.
Turkey and the US came to an agreement Thursday to pause Turkey's anti-terror operation in northern Syria.
During their conversation, Erdogan said he shared his pleasure on mutual steps the two countries took to strengthen the bilateral relations.
Separately, Turkish defense minister on Friday spoke over the phone with his US counterpart to discuss the implementation of the agreement on proposed safe zone in northern Syria, said Turkey’s Defense Ministry.
According to a ministry statement, Hulusi Akar and his US counterpart Mark Esper emphasized the aim is to successfully establish the safe zone, agreed on by Turkey and the US, within the framework of the territorial integrity of Syria
Turkey paused its Operation Peace Spring for 120 hours to allow the withdrawal of terrorist YPG/PKK forces from the planned safe zone.
Erdogan and US Vice President Mike Pence also agreed on Turkey having 20 miles (32 kilometers) of safe zone south of the Turkish border in Syria.
On Oct. 9, Turkey launched Operation Peace Spring to eliminate terrorists from northern Syria in order to secure Turkey’s borders, aid in the safe return of Syrian refugees and ensure Syria’s territorial integrity.
Based on AA