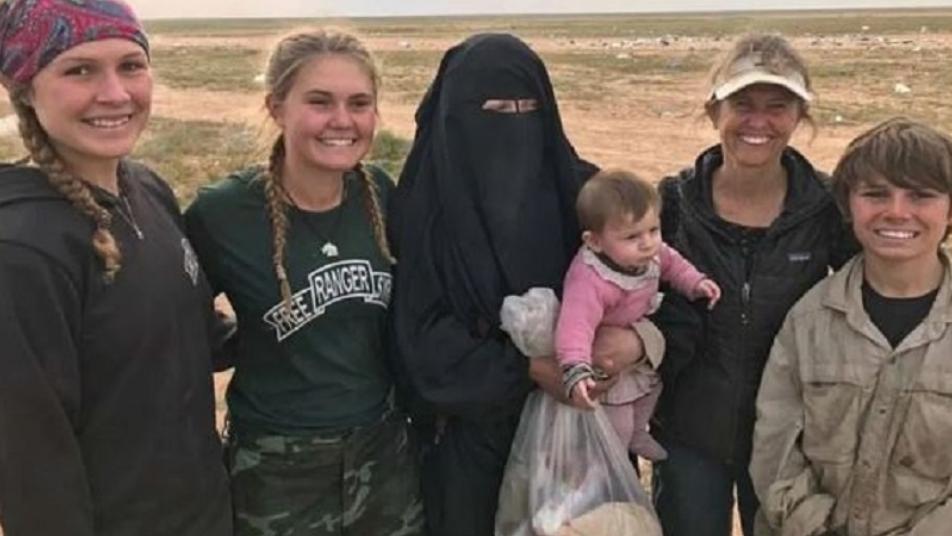 File Photo: The woman in the centre holding the baby alongside aid workers at a refugee camp is believed to be Zehra Duman, an Australian-born Turkish woman.

Two Australian former 'ISIS brides' have sent audio messages asking the Australian government to rescue them as the Assad regime’s militias advance on their prison camp.
In one message, the mother of two young children sobs: “Until now Australia hasn't done anything for us … we understand the world has hate, but we're asking just as regretful humans, don't let us fall into the hands of the regime, please.”
She is among 66 Australians, including 46 children, living in the al-Hol camp for the children and former partners of ISIS members.
Assad regime’s militiamen and a pro-Assad militia arrived in the region yesterday as part of a deal with Kurdish leaders to deter the Turkish advancement but have been accused in the past of torturing and executing ISIS prisoners.
The Australian government has indicated they will not evacuate the women and children.
__new_in_first_article1__
Petter Dutton, Australia's home affairs minister, said in a radio interview that the women in the camp “have the potential and capacity to come back and cause a mass casualty event”.
Defence Minister Linda Reynolds said the government would not risk Australian personnel to rescue the Australians.
International affairs expert professor Mark Beeson from the University of Western Australia told The Telegraph Australian authorities should do “what they can” to get the Australians out.
Professor Beeson said the Government needs to “show a bit of gumption and leadership”, adding that “the kids aren’t to blame”.
Opposition spokesperson Kristina Keneally said the Government should act to rescue the 46 children, acknowledging that some of the women would face criminal charges in Australia if they return.
Based on The Telegraph
قيم هذا المقال 1 0