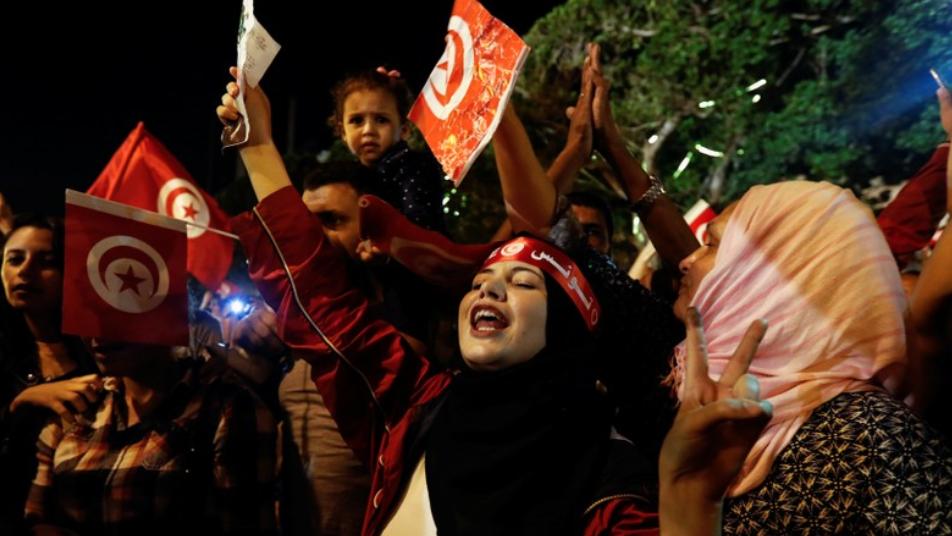 People react after exit poll results were announced in a second round runoff of the presidential election in Tunis, Tunisia October 13, 2019. REUTERS/Zoubeir Souissi
Orient Net
Supporters of retired law professor Kais Saied celebrated into Monday (October 14) morning after exit polls indicated he won Tunisia’s presidential election, a victory they hailed as a revival of the 2011 revolution that brought democracy.
Formal results from Sunday’s presidential election were expected to be released later on Monday. Saied’s opponent, the media mogul Nabil Karoui who spent much of the election campaign period in detention, could launch an appeal if he loses.
Big crowds waving Tunisian flags and chanting many of the old songs and slogans from the 2011 uprising filled the central Habib Bourguiba Avenue until the early hours of Monday.
“What I have done is a new revolution,” Saied told a separate crowd of supporters gathering at his home in the Mnihla district on the outskirts of Tunis. “I tell Tunisians that you have impressed the world.”
Saied’s victory, if confirmed by the official results, is a sharp rebuke to a governing elite that has failed to halt a decline in living standards since the revolution, or to weed out pervasive corruption, nepotism and cronyism.
A political outsider backed by both leftists and Islamists, Saied spent virtually nothing on his campaign but has called for remaking Tunisian politics by introducing an experimental form of direct democracy.
Olfa Radouan, a 53-year-old woman who brought her husband and two children to celebrate Saied’s victory in Bourguiba street, said she understood that he would face big challenges.
“It will not be easy. He will face a complicated political situation, a very difficult economic situation, unstoppable social demands,” she said.
Two separate exit polls published shortly after voting ended on Sunday showed Saied winning more than 70% of the electorate and with a turnout of about 60% - the highest in any recent election.
The polls indicated that he won more than 3 million votes - far more than the number who elected his predecessor, Caid Beji Essebsi, who died in July, and even more than the total number of voters in last week’s parliamentary election.
Based on Reuters